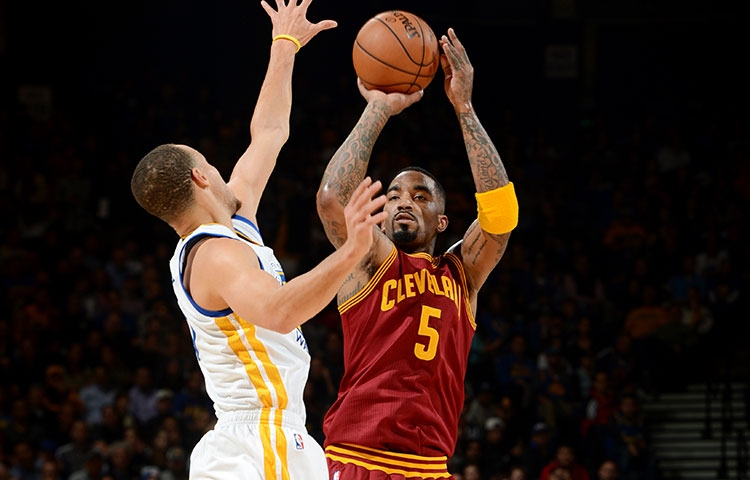 (Oakland, CA) – Although they kept up with the Golden State Warriors for most of the game, the Cleveland Cavaliers simply ran out of gas late in the fourth quarter as the Warriors defeated the Cavs 112-94 on Friday night at Oracle Arena.

Warriors guard tandem Stephen Curry and Klay Thompson, also known as the “Splash Brothers”, were a menace to the Cavs the entire game. Thompson led the Warriors in scoring with 24 points (20 points in the first half) while Curry had a double-double with 23 points and 10 assists. Despite an inadvertent elbow to the forehead from J.R. Smith in the third quarter, Thompson was able to return to the game midway through the fourth quarter.

“I knew I was going to get stitched up pretty quick, but I had faith in our guys to do their thing and hold the lead,” said Klay Thompson in his post-game interview with ESPN. “It was a great team effort. We just gotta give credit to the Bay Area fans. They’re great and they come out every night.”

Under Golden State head coach Steve Kerr’s fast-paced offense, the Cavs were embarrassingly outscored by 36-3 on fast break points by the Warriors.

For the NBA-best 29-5 Warriors, small forward Draymond Green came very close to a second triple-double in only a span of a week as he tallied 10 points, 11 rebounds and eight assists to go along with three blocks and one steal. In the four games the Warriors have played so far in 2015, Green has put up a very impressive stat line across the board, as he’s averaged 11.3 points, 11 rebounds, seven assists, 2.3 blocks and two assists per game.

Cleveland got off to a hot start in the first quarter, as they led by as many as six points on separate occasions to take a 32-30 lead into the second quarter.

After they trailed the Warriors 60-54 at halftime, the short-handed Cavs were able to keep the Warriors from pulling away as they took a 66-64 lead on a Kyrie Irving 18-foot jumper with 6:39 remaining in the third quarter. Irving finished the game with 23 points, six rebounds, five assists and three steals.

However, things went quickly went very sour for the Cavs late in the fourth quarter. When Tristan Thompson scored a basket to cut the Warriors’ lead to 93-88 with 5:52 remaining in the game, the Cavs went ice-cold from the field and only made one shot the rest of the game.

In only his second game for the Cavs, Smith led all scorers with 27 points on 11 of 23 shooting from the field. For the 20th time this season, Kevin Love produced a double-double with 17 points and 14 rebounds. However, Love has struggled in his last three games from behind the arc, as he has managed to drain just two three pointers out of 11 attempts in that span.

“There’s no reason to fall into a rut or a hole,” said Love on the Cavs’ recent play. “I mean, we’re going to be better.”

Timofey Mozgov, who made his Cavs debut Friday night, came off the bench for Cleveland and in 27 minutes he scored nine points, grabbed eight rebounds and had the Cavs’ only blocked shot of the night.

With the loss, the Cavs are now 2-8 in their last 10 games as they played the first game of their five-game West Coast road trip. Inactive for his seventh straight game with left knee and back strains, LeBron James was surely missed as the Cavs fell to 1-7 on the season when he is not in the lineup.

On Sunday night, the Cavaliers (19-18) will look to end their four-game losing streak as they will travel to play the Sacramento Kings (15-21) at Sleep Train Arena. The game is scheduled to tip off shortly after 9:00 pm ET and will be shown nationally on NBATV.