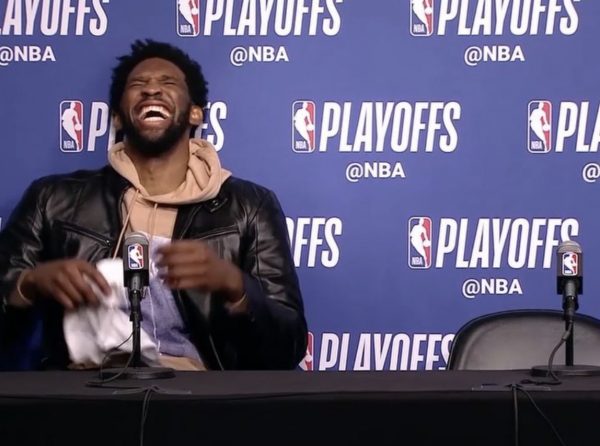 The infamous collapse of the Golden State Warriors in the 2016 NBA Finals against the Cleveland Cavaliers has become quite the point of ridicule for teams leading 3-1 in a playoff series.

After the Philadelphia 76ers defeated the Brooklyn Nets 112-108 in Game 4 of their first-round playoff matchup Saturday night, Sixers All-Star center Joel Embiid decided to be cautious about their current standing.

However, he ended up making fun of the defending champions in the process.

Joel Embiid couldn’t help but add in a 3-1 joke in his postgame presser ?

“We definitely don’t want to be in the situation like the Warriors two years ago,” Embiid joked to reporters.

Sixers forward Jimmy Butler, who was seated alongside Embiid when he made the quip, couldn’t help but break out in a smile as he stood up and left the big man at the podium.

Despite the fact that the 7-foot big man was definitely cracking a joke to lighten up the mood during the postgame presser, the Sixers would be wise to heed their franchise center’s warning.

The Warriors were up 3-1 versus the Cavaliers in 2016 before an enormous collapse in the final three games led to their downfall. LeBron James, Kyrie Irving and Kevin Love led the team to the historic and improbable comeback.

No team had ever faced a 3-1 deficit and won a NBA Finals series until the Cavs made history with three straight wins that culminated in the franchise’s first-ever NBA title.