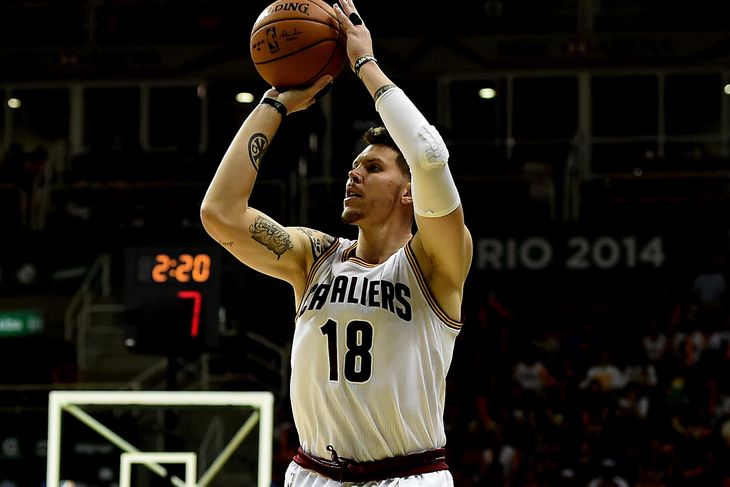 (Cleveland, OH) – After missing the last seven games for the Cleveland Cavaliers, Mike Miller returned from a concussion and was thrusted into the starting lineup for the first time this season. Miller definitely made his presence felt in his return.

“When the fire is hot, you let it burn and he did tonight,” said Cavs head coach David Blatt about Miller’s shooting. “He came out ready and he was important tonight.”

Behind an unlikely hero in Miller, the Cavs were able to put Wednesday night’s debacle against the Atlanta Hawks behind them as they defeated the Brooklyn Nets 95-91 at Quicken Loans Arena on Friday Night.

Miller was white-hot on the court, sinking seven of his eight three pointers for 21 points to rally the Cavs to victory over the Nets. This was a surprise as Blatt abruptly changed his starting lineup and bench rotation, sending Shawn Marion back to the bench and cutting down the playing time of Dion Waiters.

“We really have been getting a great contribution from Shawn (Marion) when he was starting, but we are looking at our situation and we have had some issues coming off the bench,” Blatt said regarding the decision to start Miller. “We’re looking for a way to fortify that.”

Despite scoring 21 points on Wednesday night in Cleveland’s 127-98 blowout loss to the Hawks, Waiters only played seven total minutes against the Nets on Friday night. LeBron James had another solid night as he led the Cavs in scoring with 22 points as well as nine assists. James passed Charles Barkley on the all-time scoring list with 23,758 points, which places him at 23rd on the list in front of Barkley.

The Cavs found themselves in an early deficit, trailing 33-23 with under one minute remaining in the first quarter. After the first quarter however, the Cavs’ defense flexed their muscle and held Brooklyn’s offense in check the rest of the night. The Cavs led 54-49 at the half, and their strong defense propelled them to victory over the Nets.

In addition to the loss, the Nets suffered another significant injury as Nets guard Deron Williams re-injured his calf that had been bothering him. Williams managed to only play 10 minutes but dished out five assists on the night. Brooklyn has already dealt with center Brook Lopez’s lower back strain, which has kept him out of the past seven games.

Brooklyn Nets All-Star shooting guard Joe Johnson led the team in scoring with 26 points. He also had four rebounds and five assists on the night.

James put the game on ice with one second remaining in the fourth quarter, making a clutch free throw to cushion Cleveland’s lead to 95-91. Free throw efficiency was crucial tonight for the Cavs, as they made 24 of 29 attempts compared to Brooklyn only shooting eight of 12 from the free throw line.

Although he had a team-high 14 rebounds on Friday night, Kevin Love struggled mightily from the field as he only made one shot out of his 10 attempts. However, he was a perfect four of four from the free throw line.

With the much-needed victory, the Cavs improved to a respectable 15-10 record on the season. For Brooklyn, the loss drops them to 10-15 and currently out of the playoff picture. The Boston Celtics, with a 10-14 record, currently hold on to the eighth seed in the Eastern Conference.

The Cavs look to improve on their win as they continue their homestand and host the red-hot Memphis Grizzlies on Sunday, December 21. Memphis currently possesses a 21-5 record and the current second seed in the Western Conference. The game is set to tip off shortly after 4:30 pm ET.