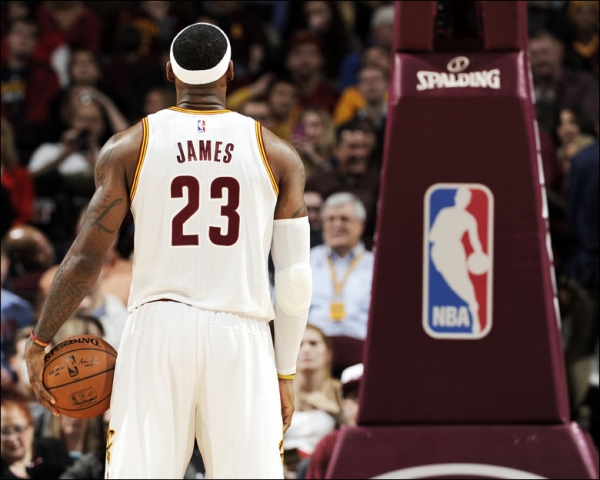 (Cleveland, OH) – Despite yet another hot start in the first quarter, the Cleveland Cavaliers rapidly cooled off in a 127-98 drubbing delivered by the Atlanta Hawks at Quicken Loans Arena on Wednesday Night.

After a 127-94 blowout loss to the Cavs a little over a month ago on November 15 in Cleveland, the Hawks were very hungry for revenge. The Hawks seized the opportunity and put on a shooting clinic against the Cavs.

“That was embarrassing how we played and I apologize to the fans who came out,” said Cleveland head coach David Blatt after the game regarding the Cavs’ worst defeat of the season. “Just a poor, poor performance.”

The first quarter looked extremely promising for the Cavs, who scored 34 points in back-to-back first quarters after outscoring the Charlotte Hornets 34-17 on Monday night. The Cavs are currently the highest scoring team in the NBA when it comes to point per game in the first quarter.

In the closing seconds of the first quarter, LeBron James crossed over Hawks guard Thabo Sefolosha, causing Sefolosha to fall to the floor as James drove in to the paint. James then passed to Matthew Dellavedova, who drained a 26-foot three pointer with two seconds left on the clock and gave the Cavs a 34-26 lead at the end of the first quarter.

James had 11 of his 21 total points in the first quarter, although he sat out the entire fourth quarter. He made eight of his 16 shots despite playing only 29 minutes. Kevin Love had a very good first quarter as well with nine points, five rebounds and four assists. Love finished with a double-double, scoring 13 points and grabbing 10 rebounds.

After Dellavedova hit his second three pointer of the night with 6:20 remaining in the second quarter, the Cavs led by their largest margin of the game at that point at 50-38 over the Hawks. From that point on, the Hawks, who were without star point guard Jeff Teague due to a bad hamstring, kicked their shooting into high gear for the remainder of the game.

Being down only 65-60 to the Hawks at halftime, the Cavs needed to come out with a spark to keep up with the hot-shooting Hawks. However, they came out completely flat and allowed the Hawks to raise their shooting percentage to over 71% for the game with 5:11 remaining in the third quarter.

Outside of Mack, Hawks center Al Horford had one of his most efficient games on offense this season, going 10 of 14 from the field. Hawks guard Dennis Schroder, who was making his first career start in place of Teague, had a double-double with 10 points and 10 assists. Atlanta took a 95-75 lead into the fourth quarter over Cleveland, and things would not get better for the Cavs.

In response to the Hawks shooting 64.5% for the game, James was quite concerned with his team’s defensive effort as of late.

“We allowed them to get too many open looks, and you can’t do that,” said James to reporters after the game. “This was a well-coached team that we played. They move the ball to get you into uncomfortable positions.”

A bright spot for the Cavs on offense was guard Dion Waiters, who came off the bench to score 21 points on nine of 18 shooting. He also had four assists and three rebounds Wednesday night. Kyrie Irving and Love led the Cavs in assists with six each.

After having their eight-game winning streak snapped by the Oklahoma City Thunder on December 11, the Cavs have now lost three of their last four games. Cleveland looks to bounce back on Friday night when the Brooklyn Nets come to Quicken Loans Arena in a game that will tip off shortly after 7:30 pm ET. The Cavs won the first game between the two teams at the Barclays Center in Brooklyn on December 8 by a score of 110-88.