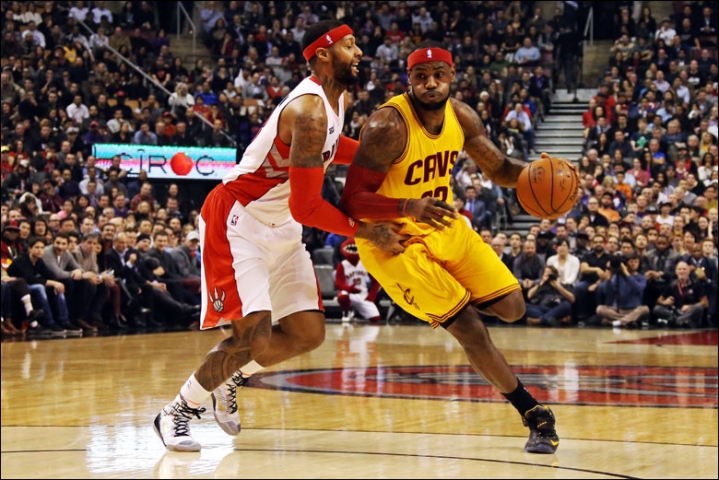 (Cleveland, OH) — The Cleveland Cavaliers (12-7) face off against the Toronto Raptors (16-5) for the third time this season on Tuesday night at Quicken Loans Arena. The Cavaliers are coming off their seventh-straight victory in a recent defeat over the Brooklyn Nets, 110-88, thanks in no small part to solid production from the bench.

Dion Waiters and Tristan Thompson did a the majority of the damage for the reserves, and provided much needed energy and scoring off the bench. Waiters poured in a game-high 26 points, shooting 11-21 from the floor, while Thompson scored 14 points to go along with his 12 rebounds.

Thompson has been a strong force off the bench during this current win streak and seems to be growing into his new role.

“I come out ready to play,” Thompson said after the game, “My job is to come out and play hard and get my hand on loose balls….coach challenges us every game, for the bench to be ready, and come in and contribute. We gotta help our starters and keep the energy up when we’re in the game.”

Thompson has especially flourished in his minutes with LeBron James on the floor; look for him to get increased minutes subbing in for Anderson Varejao as the Cavs progress further along in the season, and the team looks to rest the older Varejao more often.

The night was especially memorable for Waiters, whose name had come up numerous times this week in trade rumors, and his relief was palpable after the game.

“I told everyone,” Waiters said, “It’s coming, the rhythm, when I get it I gotta seize the moment. ‘Bron found me a lot tonight, missed a couple easy ones, but I was still being aggressive; I didn’t let a couple misses discourage me. When I did miss, I was able to impact the game on the defensive end. [I] got steals, got stops, and found guys in the open court. When I’m able to play like that, we know what can happen.”

The bench as a whole contributed 59 points, 21 rebounds, 11 assists, five steals, and five blocks, a significant improvement from recent games.

The defense was very impressive yet again, and provided yet another encouraging sign. While the Nets are by no means an offensive juggernaut, the Cavs were able to hold them to just 44% shooting from the field and 21% from the three-point line. No Nets player scored more than 14 points during the game. The Cavaliers have been steadily improving on the defensive end and will look to continue the upward trend in a tough stretch of upcoming games.

The Raptors on the other hand are struggling (by their standards) after the loss of DeMar DeRozan to a groin injury. After starting off the season 13-2, the Raptors have gone 3-3 with losses to the Los Angeles Lakers, Dallas Mavericks, and (most recently) Cavaliers. Toronto has struggled defensively in DeRozan’s absence and star point guard Kyle Lowry has been forced to shoulder a larger load on the offensive end.

Keys to the game: For the Cavs to pull off their eighth win in a row, they are going to need to lock down Lowry on the defensive end. Lowry is an absolute bulldog type of a player, and is making his case to be a starter in the All-Star game. If Kyrie Irving can make Lowry work, and the Cavs can prevent Lowry from easily collapsing the defense and hitting shooters on the perimeter, then the Raptors should struggle to create any consistent offensive rhythm throughout the game.

The Cavs will also need to emphasize crashing the boards in this game. The Raptor front line of Amir Johnson and Jonas Valanciunas is a formidable one that will test the Cavs’ big man rotation. If the Cavs can win the rebounding battle, then that will help them dictate the pace and slow down a potent Raptors offensive attack.

If the Cavs pull this one out, they will have recorded consecutive victories over the top ranked team in the East, a strong rebuttal to the cavalcade of doubts from early in the season.