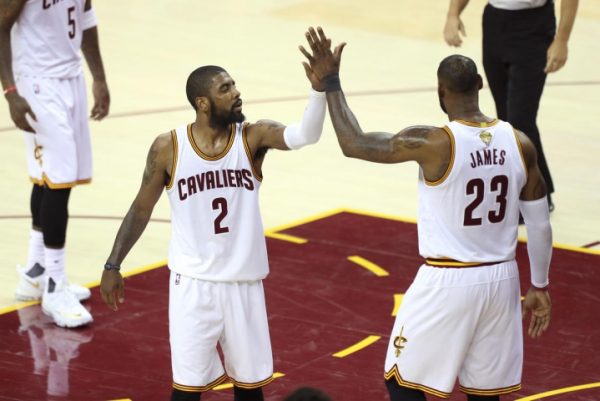 (Cleveland, OH) — The Cleveland Cavaliers managed to extend their season at least three more days as they led from start to finish and knocked off the Golden State Warriors, 137-116, at Quicken Loans Arena on Friday night. The performance saw the Cavaliers establish a number of new Finals and postseason records along the way, with the contest marked by contentious play on both sides that resulted in a combined seven technical fouls, one flagrant foul and an extended argument between LeBron James and Kevin Durant.

The 49 points the Cavs collected during the first period established a new NBA Finals record for points in a quarter and the 24 3-pointers they made broke the Finals record in that category. In addition, the 86 points scored during the first half by the Cavs marked the most points during the first two quarters in NBA Finals history, breaking the mark of 81 that was set by the 1982 Philadelphia 76ers. Finally, the 68 first-half points by the Warriors established the combined 154 points as the most in NBA postseason history, breaking the old mark of 150 set by Denver and San Antonio on April 26, 1983.

“Our motivational speech was our backs are to the wall and facing a 3-0 deficit,” said Kevin Love. “We have to take one game at a time. I know that’s a cliche, but it’s the truth.”

Kyrie Irving paced the Cavs with 40 points, including seven 3-pointers, while also adding seven rebounds and four assists. Meanwhile, James collected yet another triple-double with 31 points, 11 assists and 10 rebounds, with Love contributing 23 points and seven boards. J.R. Smith was the only other Cavs player to score in double figures, notching 15, with all five baskets coming from long-range. Finally, Tristan Thompson emerged with a 10-rebound performance, with half of those coming in the first five minutes of action.

“It’s do-or-die. We understand that you have to demand a lot out of ourselves,” Irving said. “We had to leave it out there and we relish the challenge on Monday.”

Showing an aggressive nature from the start, the Cavaliers jumped out to an early double-digit lead and had held a 27-11 advantage just five minutes into the contest. The Warriors chipped away at the lead, but by the time the horn had sounded, the Cavs held a 49-33 lead. One of the main weapons that powered the surge was Cleveland’s three-point shooting, as they managed to hit on seven long-range bombs during the opening period. The offensive explosion was also fueled by 21 trips to the free-throw line, though Cleveland missed a golden opportunity to score even more by missing eight of those attempts.

While the Cavaliers managed to only score 37 points in the second quarter, they made the most of their shots by hitting 64 percent from the field during those 12 minutes. The Warriors again chipped away at the deficit, but the Cavs built as much as a 22-point lead before they headed to intermission holding an 86-68 lead. Irving tossed in 17 points during the quarter and James added 14 to power the Cleveland offense.

“We made shots and we played well defensively,” Cleveland head coach Tyronn Lue said. “When you’re down 3-0 and fighting for a win, you do what it takes and we brought some physicality to the game.”

The Cavaliers cooled off in the early portion of the third quarter as the Warriors whittled the margin down to 12 points. Golden State also caught a break during a bizarre moment with 6:18 left in the period when Draymond Green was assessed a technical foul. The belief was that because he had already been assessed a first-half technical, he was supposed to be ejected from the game. However, officials indicated that Warriors head coach Steve Kerr had been called for the earlier technical, despite individuals from the scorers’ table noting that officials had given the earlier technical to Green.

Still, the Cavaliers were able to hold down any further push by the Warriors and boosted the lead back up to 19 points at 115-96 by the time the third quarter had ended, aided by a pair of 3-pointers in the final minute of the period. The Warriors were never able to get the deficit into single digits during the final quarter, ending their dream of going undefeated through the postseason.

“We have championship DNA as well. We kept our composure and we were physical,” James said. “We know it’s (Game 5) going to be a challenge. If we continue to not turn the ball over and continue to defend, we have a good chance.”

Though the circumstances are different from last year, the Cavaliers find themselves in the same position as they head into Monday night’s Game 5, trailing 3-1 in the series. That contest will be back at Oracle Arena in Oakland, with the Cavs seeking to pull off the impossible by becoming the first NBA team ever to come back from a 3-0 deficit. Tipoff for that contest will be just after 9 p.m. ET.

“We need to come out early and be aggressive,” Thompson said. “They do a lot of talking and we don’t have time for that s—.”