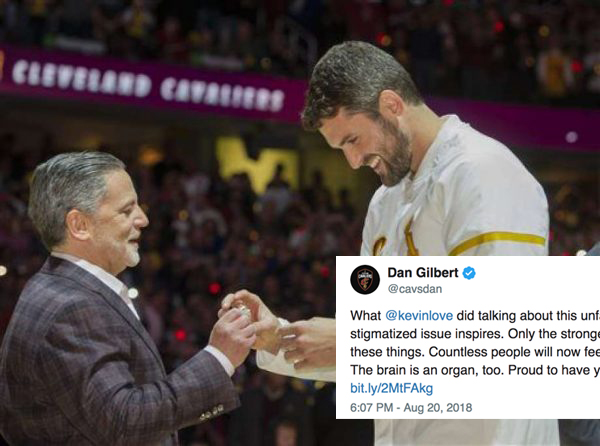 Over the course of this offseason, Cleveland Cavaliers power forward Kevin Love has continued to promote the importance of speaking up about mental health issues. Among the many supporters of this approach is the man who signs his paycheck, Cavs owner Dan Gilbert, who used social media on Monday to salute his veteran star.

What @kevinlove did talking about this unfairly & now formally stigmatized issue inspires. Only the strongest of individuals do these things. Countless people will now feel it's 'OK' to get help. The brain is an organ, too. Proud to have you rep the @cavs. https://t.co/HaAdhkBs9A

Back in March, Love first wrote about the anxiety issues he was dealing with, and in the ensuing months, has continued to champion the cause. Love’s admission came in the wake of fellow NBA star DeMar DeRozan also recounting similar issues, with the overall message seeming to take root. That was evident from New Orleans Pelicans forward Jahlil Okafor using social media over the weekend to credit Love for making him more aware of his own mental health concerns.

The stigma about this type of illness that Gilbert spoke about has often meant that pertinent issues are either not discussed or dealt with privately. That’s been especially true in the world of athletics, where aggressiveness has been prized and any admission of needing help for such matters has been considered to be a sign of weakness.

Someone with the prominence and platform that Love possesses helps lessen that stigma and offers hope that it can eventually be eliminated. Even though he signed a contract extension with the Cavaliers over the summer that will pay him $120 million over a four-year period, Love is not immune from the daily pressures everyone faces. Serving as the public face of this battle is one reason why a Cleveland-based mental health organization will be presenting Love with an award in November for his work in this area.