Tyronn Lue once snapped at LeBron James and Kyrie Irving: ‘You guys play and I’ll coach the f—–g team’ 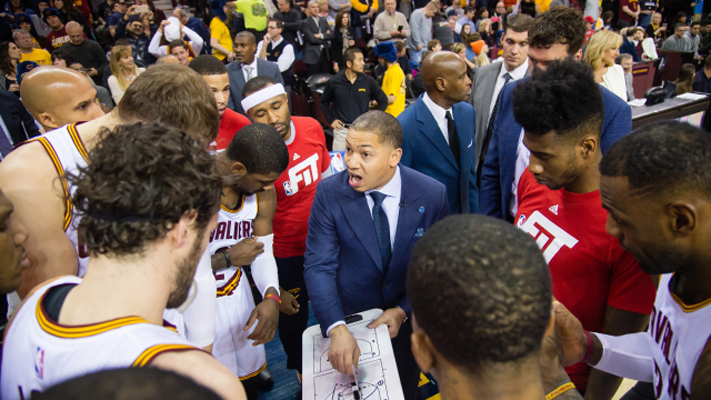 Former Cleveland Cavaliers head coach Tyronn Lue had no problem colliding with superstars LeBron James and Kyrie Irving during their time together in Cleveland.

According to Kevin Arnovitz of ESPN.com, Lue held his own when James and Irving would try to alter game plans.

“Lue’s ability to earn the trust of superstars is an invaluable trait,” Arnovitz wrote. “In the words of one of his colleagues, Lue is an expert at going after a star player without leaving a scar. Another source recalled a timeout during one of Lue’s first games as a head coach in Cleveland in January 2016, when LeBron James and Kyrie Irving interjected to contradict a tactical adjustment. Lue responded, without ire or defensiveness, ‘Why don’t you guys play and I’ll coach the f—ing team.'”

The general earned a ton of respect during his first head coaching stint in Cleveland, where he coached the Cavs from 2016 to 2018.

Of course, Lue led the Cavs to their first championship in 2016.

The Cavs fought back from a 3-1 deficit against the star-studded Golden State Warriors to win in historic fashion during the 2016 NBA Finals. During Game 7 of that gritty series, Lue and James almost got into a fight.

However, that type of accountability and transparency is what led the pairing to have tremendous success.

Now, James and Lue are on rival ends in Los Angeles.