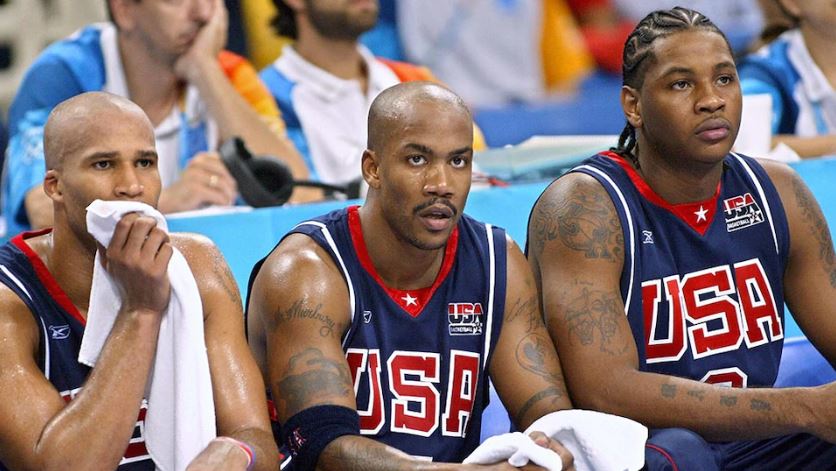 Richard Jefferson recently slammed Carmelo Anthony for comments he made about the former Cleveland Cavaliers forward.

During an appearance on the Uninterrupted platform, Anthony shared that he was frustrated by the fact that he played behind older players such as Jefferson and Shawn Marion on the 2004 U.S. Olympic men’s basketball team.

On Wednesday, Jefferson reacted to Anthony on ESPN’s “The Jump,” explaining why the latter wasn’t given the opportunity to play significant minutes on the U.S. squad.

I pulled the numbers the next few years 🤔😏

“Carmelo was not ready,” Jefferson said in response. “He wasn’t. And truth be told, neither was I. We had the youngest team of all time, of all the Dream Teams. We had eight players under 25.”

Though Jefferson respected Anthony’s place in U.S. men’s basketball history, he couldn’t help but take a shot at the Portland Trail Blazers’ forward.

However, Maverick Carter claimed that Anthony and LeBron James, who also played on the U.S. squad in 2004, “destroyed” Jefferson and Marion the season following the Summer Olympics.

“Carmelo is the greatest USA men’s basketball player internationally that this country has ever seen,” Jefferson added. “So I’m not going to look at him and disrespect him. I’m not going to disrespect our careers, but even if you go back and look at the next three times we played against each other, the very first game we played against each other, I had to go back and look at the stats because I saw the clip.

“I had 26 (points) and 11 (rebounds) and held Carmelo to nine points. So Carmelo was not ready at the time. Now I understand he was in his first or second year, and his career is far greater than mine. That’s not the conversation. But in that moment, at that time, Carmelo wasn’t ready, I truly wasn’t ready.”

Anthony was only 20 years old when he played for Team USA in 2004. He was just a few months removed from his rookie season, which explains why U.S. head coach Larry Brown chose to play Jefferson and Marion ahead of Anthony.

The team failed to grab the gold medal that year, settling instead for the bronze which prompted a major change in the way USA Basketball chose its players in succeeding international tournaments.