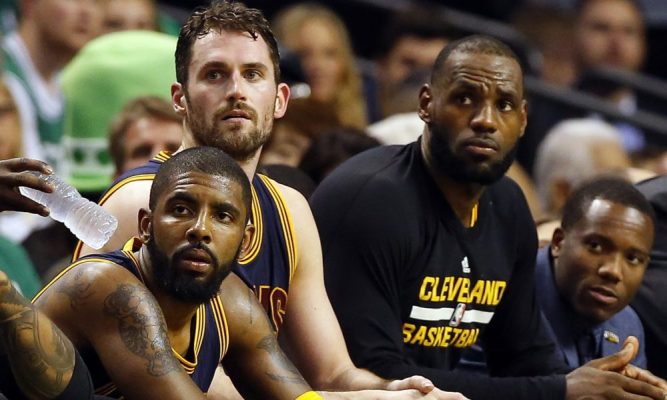 With the 2019-20 NBA season on pause due to the coronavirus, Cleveland Cavaliers star Kevin Love has had a ton of time to reminisce on the franchise’s heyday.

In an interview with Jason Lloyd of The Athletic, Love shared that he wished the Cavs had one more championship run with superstars LeBron James and Kyrie Irving.

Love, who outlasted James and Irving in Cleveland, is the second player to recently express that he wishes that that Cavs championship team had stayed intact. Former Cavs guard Iman Shumpert also revealed that he wishes the 2016 squad had more time together.

The Cavs went to four consecutive NBA Finals between 2015 and 2018.

Serving as the acme of that competitive period was the teams’s 2016 championship. The Cavs stormed back from a 3-1 deficit to spurn the star-studded Golden State Warriors in the 2016 Finals.

The Warriors signed 2014 MVP Kevin Durant the ensuing summer, which made the already formidable team unbeatable. While the Cavs and Warriors met up again in the 2017 NBA Finals, Durant led Golden State to an easy 4-1 victory over Cleveland.

Then, all hell broke loose.

For reasons that are somewhat still arcane, Irving demanded a trade from the Cavs in the summer of 2017. The then-shocking development rocked the team.

While the organization was able to deal Irving to the Boston Celtics in 2017 in exchange for Isaiah Thomas, Jae Crowder, Ante Zizic and a couple of draft picks, the return package never ended up boosting the Cavs’ chances of winning a championship the following year.

Despite the Cavs having a completely different roster to battle the Warriors in the 2018 Finals, James and company got swept.