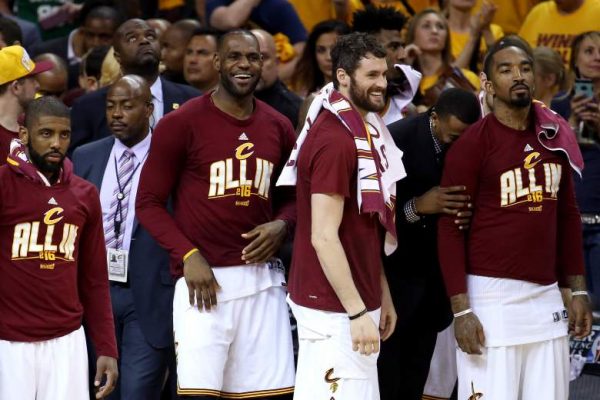 The 2016 Cleveland Cavaliers will forever hold a place in the hearts of Cavs fans everywhere.

The reason, of course, is because that team was the one to finally bring an NBA title to Cleveland. According to Kevin Love, there are four players from that team who should one day have their jerseys retired by the Cavs.

Love sat down with Jason Lloyd of The Athletic to discuss which teammates from that 2016 squad deserve to be immortalized by the organization.

“That’d be amazing, especially here,” Love said about getting his No. 0 jersey retired in Cleveland. “It’s bigger than basketball in a way because it’s relationships, it’s teammates that I’ll consider family and brothers the rest of my life. Champ (James Jones) is like literally my brother. He’s blood to me. The fans, I told my own personal stories, but here it’s bigger than basketball. To have my name up there embedded in this organization is huge, especially because strictly from a basketball standpoint, there was a 52-year drought and we won it in the fashion that we did. You have that banner, you have all the conference champions, and then you have Kyrie [Irving] and Bron (LeBron James) and myself and Tristan [Thompson]. I do think those are four guys who should be retired.”

Ultimately, it’s quite possible that all four players do end up having their numbers retired in Cleveland.

Love, Thompson and James seem to be near locks to one day receive the honor. Irving may be less of a sure thing due to the fact that his tenure in Cleveland ended after he demanded to be traded. Even considering the ugly exit, there is no denying Irving’s impact on the Cavs’ championship-winning season.

At the moment, it isn’t all that surprising to hear that Love is contemplating his legacy in Cleveland. With trade rumors swirling, it seems his time on the Cavs could soon be coming to an end.

If he does end up getting traded, there is little doubt that his eventual return to Cleveland to face off against his former team will be met with a chorus of cheers and ample adulation.