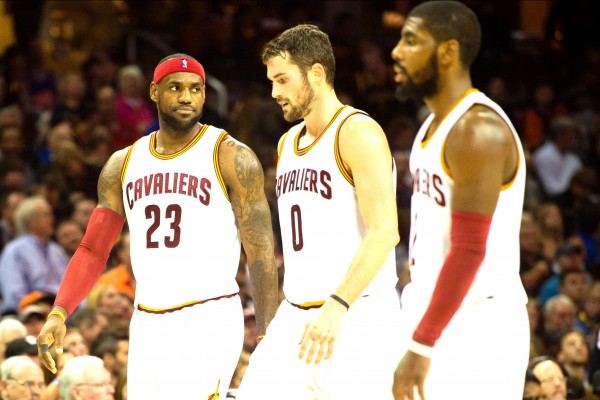 The intense rivalry between the Cleveland Cavaliers and Golden State Warriors was one that spanned four seasons and saw the two teams battle in an NBA record four consecutive finals.

In the case of the Cavaliers, one of their former beat writers, spoke about how Cavs players could often be seen watching Warriors games in the team’s locker room following the return of LeBron James.

Chris Haynes covered the Cavaliers for two seasons for the Plain Dealer beginning in 2014 and got a close-up look at each member of the team. In an appearance on FS1’s “Undisputed”, he compared the Cavaliers-Warriors rivalry to the intracity one developing between the Los Angeles Lakers and Los Angeles Clippers. That’s because the one common denominator in both rivalries is James.

Haynes pointed out (at approximately 1:00) that the Cavaliers’ perceived path to an NBA championship in 2014-15 was suddenly being overshadowed by the exploits of the Warriors.

“After Cavs games, we would go into the locker room and the Cavs players were watching Warrior games,” Haynes said. “And so that’s when we started noticing, ‘Oh, shoot, the Warriors were taking away some of this buzz that LeBron was getting when he came back to Cleveland.'”

Haynes then pointed out that in subsequent matchups between the Cavaliers and Warriors, James played much more aggressively, comparing him to a free safety in football.

Last season, the Cavaliers no longer had James, who left to play for the Lakers. His absence, coupled with injuries and trades, resulted in the team’s collapse and a 19-63 record on the year. In the case of the Warriors, they once again reached the NBA Finals, but fell in six games to the Toronto Raptors.

For the 2019-20 season, the Cavaliers are still a long way from contending for even a playoff spot, while the Warriors are expected to slip because of injuries and key absences. All that’s left of that once-torrid rivalry are memories.