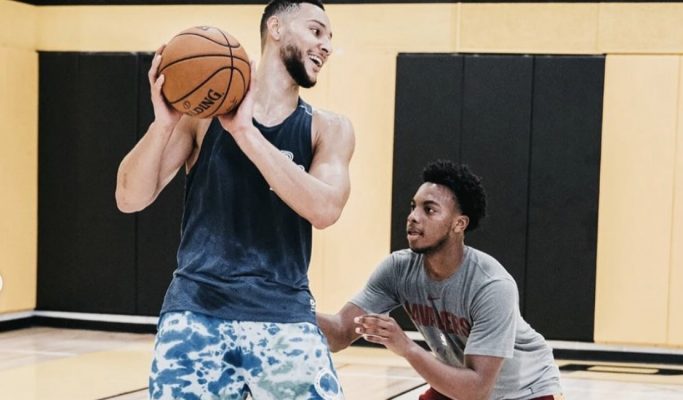 Ben Simmons has been working on his game all summer long. Recently, he was joined by prized Cleveland Cavaliers rookie Darius Garland.

The Philadelphia 76ers star posted a photo of himself with Garland on Instagram after their joint training session.

Got some good work in with my brother @darius_garland ???

Training camp is just a month away so it’s not a surprise that Garland is busy preparing his body for the coming grind. Soon after, he will appear in his official debut game for the Cavs when the 2019-20 regular season commences in October.

For Simmons, the workout is part of his prep work to improve his craft, particularly his outside shooting.

After the Philadelphia 76ers were ousted from the playoffs by the Toronto Raptors in Game 7 of the Eastern Conference semifinals last season, the 6-foot-10 point guard took the brunt of the blame for being too passive in the series. The lack of aggressiveness was attributed by observers mostly to his lack of a perimeter game.

This offseason, however, Simmons has so far shown that the work he is putting in is paying off. A recent video was posted on social media showing how good that jumper looks nowadays.

Cavs fans should have very little to worry about when it comes to Garland struggling from beyond the arc. In his short college career, the guard shot an impressive 47.8 percent from deep. Still, working out alongside a young All-Star like Simmons should encourage him to keep working on his game to get better.

This should bode well for the Cavs who expect great things from the No. 5 overall pick of this year’s draft.