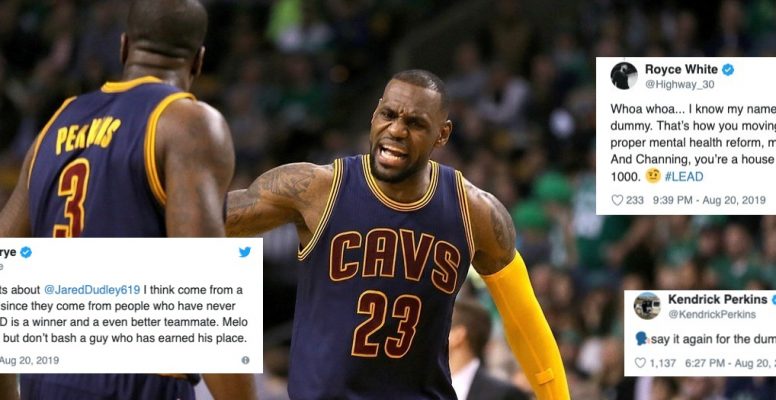 White called out James and the Lakers organization for giving a roster spot to Jared Dudley while Carmelo Anthony was still available for the taking.

So all the comments about @JaredDudley619 I think come from a place of ignorance since they come from people who have never been in the NBA. JD is a winner and a even better teammate. Melo deserves a chance but don’t bash a guy who has earned his place.

?say it again for the dummies in the back

Frye and Perkins were teammates with James in Cleveland during his second tour of duty with the Cavaliers. They stood up for their former leader while attacking White at the same time.

White, who now plays for the BIG3, responded to the two with a jab of his own.

Whoa whoa… I know my name isn’t being associated with the word dummy. That’s how you moving Perk? When I was pushing for the proper mental health reform, most of y’all were picking your noses. And Channing, you’re a house negro anyway. Let’s just keep it 1000. ? #LEAD

Despite being the 16th overall pick in the 2012 NBA Draft by the Houston Rockets, White’s NBA experience spans just three games for the Sacramento Kings in the 2013-14 season.

In a quick interview, White made it clear that while he holds Anthony in high regard, he has no problem lambasting the Lakers, James and Dudley.

"How is [LeBron] letting his banana boat buddy wait out there in the wings? And they go sign Jared Dudley and not Carmelo."

–Royce White on why he thinks Melo is being blackballed. (via Fanatics View/YouTube) pic.twitter.com/rjq5WQ2XdV

“Melo is absolutely being blackballed,” White lamented as he started off his rant by defending the 16-year veteran.

“He’s given too much to the game for them not to allow him to play or for them to culturally just make a decision or an agreement that he’s not good enough anymore. All of us here that played the game at the highest level know how good Melo is and we know that there’s no way that the Lakers would go out and sign Jared Dudley and not sign Carmelo Anthony.

“And another question is, while a guy like LeBron is walking around here like he’s the face and voice of the players, how is he letting his banana boat brother hang out there in the wings and they go sign Jared Dudley and not Carmelo. If anybody watching this thinks that Jared Dudley can hold Carmelo’s jockstrap, I’ll slap them.”

Anthony is considered by many as a first ballot Hall of Famer, but his reputation around the league has soured after unsuccessful stints with the Rockets and Oklahoma City Thunder the past two seasons. In fact, no team took a chance on him after he was waived by the Chicago Bulls, who traded for him in January of this year.

If James had pushed the Lakers to sign Anthony, it would have given the team more firepower off the bench, but perhaps at the expense of team chemistry.

A strong-willed former superstar such as Anthony could potentially disrupt the Lakers’ bid for a championship, and this is likely the main reason why the team chose to go with Dudley rather than the 10-time All-Star.