Report: Cavs Will Give Kevin Love Option to Stay or Leave 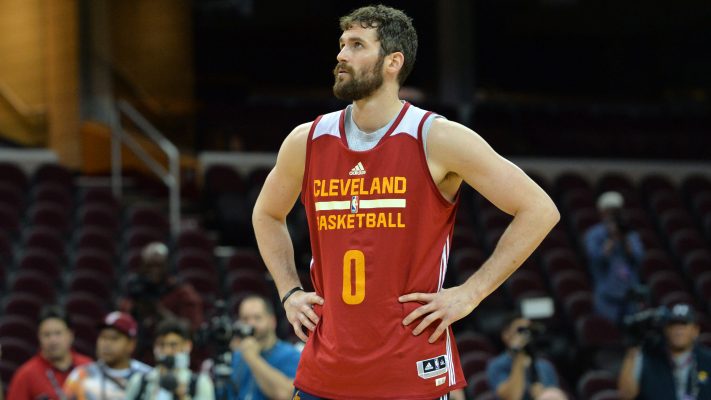 Following the departure of LeBron James, it is clear that the Cleveland Cavaliers are on the cusp of a new era of basketball. One player who still remains from the previous era is All-Star big man Kevin Love.

While Love is a member of the Cavs at the moment, it appears that whether or not he plays in Cleveland in the upcoming season is partially up to him.

In a recent interview between Cavs head coach Tyronn Lue and former NBA player Eddie Johnson on SiriusXM NBA Radio, Lue stated that Love has earned the right to play a role in dictating his own future in the NBA.

Will Kevin Love play for the #Cavs next season? Ty Lue says, "We gotta see if he wants to be here for us to rebuild" https://t.co/AVUQFvD6Du #NBASummer pic.twitter.com/BEZKG0dIy1

“And he’s earned that right.”

Love currently has two years left on a five-year, $114 million deal that he signed in the summer of 2015. He averaged 17.6 points and 9.3 rebounds in 59 games last regular season.

Lue continued to say that based on what he’s head from Cavs general manager Koby Altman, Love is open to remaining in Cleveland.

“From all I’ve been hearing from Koby, he wants to stay, he wants to be there,” Lue said. “So we’re happy to have Kevin. Every year he takes all the criticism. For me, he’s been great. He’s been 20 and 10 every year. Being a third guy, to get 20 and 10 that’s remarkable.”

Despite the fact that Love has played at a very high level throughout his time in Cleveland, his best statistical seasons came during his tenure with the Minnesota Timberwolves. Now that both James and Kyrie Irving are no longer playing in Cleveland, Lue seems to hope that Love may be able to regain his franchise-leading numbers.

“He’s carried a franchise before in Minnesota and now he’s gonna have the same opportunity here in Cleveland,” Lue said. “So I’m excited for Kevin, I think he’s excited, and we’ll go from there.”

Time will tell if Love agrees to remain in Cleveland, or if he decides that his talents belong elsewhere in the NBA.