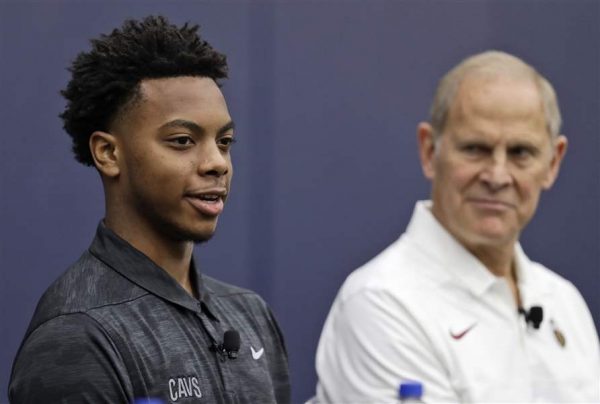 The Cleveland Cavaliers are building a team that will hopefully become a playoff contender soon.

Toward that goal, the Cavs upgraded their rotation at the guard position upon selecting Vanderbilt University product Darius Garland with the No. 5 overall pick in the 2019 NBA Draft. He and last year’s lottery pick, Collin Sexton, are expected to be the Cavs’ backcourt of the future.

In a recent interview, Garland spoke about how the young players are bonding well with one another. He also discussed Kevin Porter Jr. and Jaron Blossomgame among those that he is getting more familiar with.

“Me and Collin has bonded since Utah,” Garland replied. “It’s been really fun. Me, him and Jaron, and K.P. been on the bench cracking some jokes. Just being good teammates, of course. Everything’s been fun. But this is gonna be really exciting.”

Asked if he feels the camaraderie building between him and Sexton, Garland was quite definitive, adding that their senses of humor has helped them break the ice.

“I mean laughs, we’re both really goofy,” said Garland. “Just making each other laugh, being in the gym together at practice, competing against each other, I really feel it.”

Though Garland is practicing, he has yet to play in Summer League, but there is hope that he can still play.

In his only year at Vanderbilt, Garland averaged 16.2 points while shooting 53.7 percent from the field and an impressive 47.8 percent from three-point range. He only played in five games, unfortunately, after an injury abruptly ended his college career.

Sexton was named to the 2018-19 All-Rookie Second Team after a strong second-half showing. He averaged 16.7 points and shot 40.2 percent from beyond the arc.