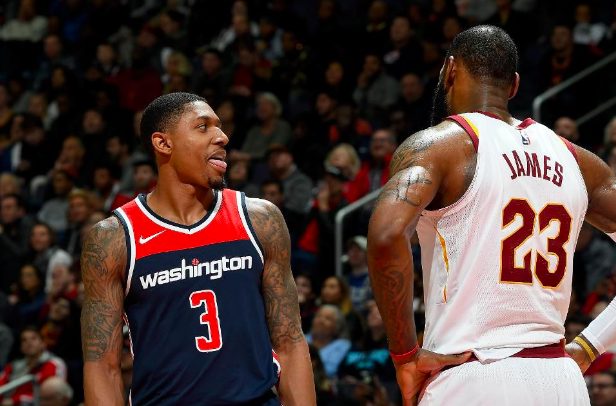 LeBron James’ first season with the Los Angeles Lakers was a failure in more ways than one.

Not only did he fail to make the NBA Finals for the first time in eight seasons, James was also at the center of one of the most dysfunctional seasons for an NBA team in recent memory.

As the 2019 offseason begins, James has high hopes that his second season with the Lakers will be more successful than the first was.

A lot of that will be dependent on whether or not the Lakers front office can surround James with more talent either through free agency or via trade.

One of those potential trade targets for the Lakers is Washington Wizards star Bradley Beal.

According to Evan Dammarell or Forbes.com, the Cleveland Cavaliers may have a crucial role to play in helping Beal and James team up in the Purple and Gold.

“But, there also could be a few snags that could arise in a hypothetical Beal to Los Angeles deal,” he wrote. “If Washington were to agree to a trade, they would be looking to shed some of their bloated contracts as well. Right now John Wall’s supermax deal (4 years, $170 million), as well as Ian Mahinmi’s ($15.5 million owed for 2019-20) and Dwight Howard’s ($5.6 million owed for 2019-20), are the three biggest offenders on Washington’s payroll. The Wizards will probably not be able to offload Wall’s contract, as he is still recovering from an Achilles injury, but can try and attach either Mahinmi’s or Howard’s remaining salary in a possible Beal trade. The problem is, the Lakers want to maintain financial flexibility to court any free agents this summer and adding extra salary would foil their ambitions. That is why the Lakers and Wizards would probably have to find a third team in order to make the deal happen.

“Thankfully, there’s a team that James knows all too well that can make this trade happen. The Cleveland Cavaliers are deep into a rebuild after James left town to join the Lakers, and are more than willing to take on bloated contracts in order to help expedite the process. Cleveland also has J.R. Smith’s partially guaranteed contract worth $3.9 million, the twenty-sixth overall pick, as well as future expiring contracts like Tristan Thompson ($18.5 million), Brandon Knight ($15.6 million), Jordan Clarkson ($13.4 million), John Henson ($9.7 million) and Matthew Dellavedova ($9.6 million) to work with as well. If the Wizards were willing to part with future draft picks, all while getting Ball and the fourth pick from Los Angeles, it would only incentivize Cleveland further to take on either Mahinmi’s or Howard’s contract.”

The Cavs have made their willingness to help facilitate deals for teams that are looking to build talent in return for future assets known. This kind of blockbuster haul could land the Cavs quite a bit of return if they do express willingness to take on some of Washington’s huge contracts so that the Lakers don’t have to.

While the Cavs surely wouldn’t get the shiny new piece as a part of the deal, they would be doing a great job of better preparing for the future.

The Wizards finished the 2018-19 season with a record of 32-50. Beal’s talent alone likely accounted for many of those wins. If they were to trade him away, any first-round picks that they would be willing to part with would likely be high valuable when it comes to future draft lotteries.

It remains to be seen whether or not the Cavs want to play this kind of role of sending talent to L.A., but chances are good that if the deal is right, they will make it.