Report: LeBron Denies Any Turmoil Between Cavs and David Blatt 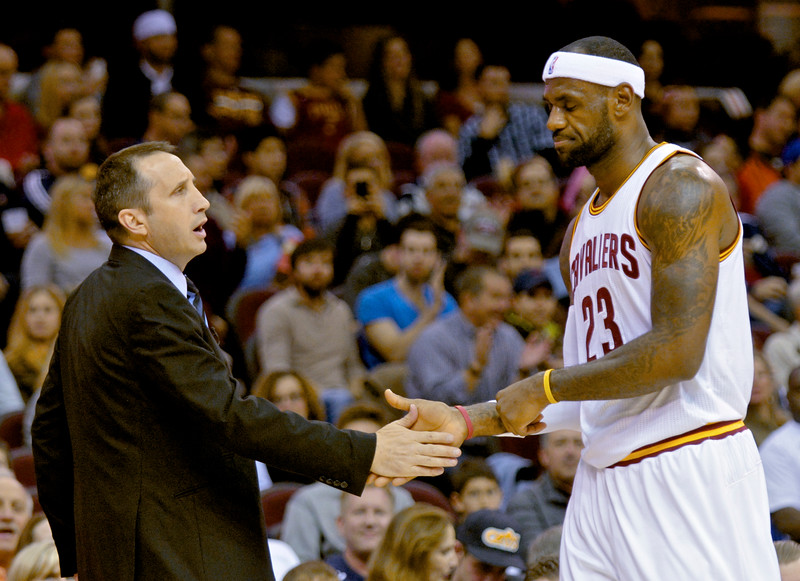 Less than one day removed from a humiliating loss at home to the Detroit Pistons that had fans booing the team, ESPN.com is reporting that “league sources” are saying that Cleveland Cavaliers’ head coach David Blatt’s ability to connect with his team is a cause for concern in the organization.

LeBron James when asked if David Blatt is the “right” coach for the Cavs: “Yeah, I mean, he’s our coach, what other coach do we have?”

Both Brian Windhorst and Marc Stein of ESPN also reported that,

Whispers about the lack of attention that various Cavs players are paying to Blatt during some timeout huddles, as well as their apparent preference to communicate with Cavs assistant and former NBA player Tyronn Lue, have been in circulation for weeks. And James acknowledged recently that he did not formally request permission to assume the bulk of the Cavs’ playmaking duties, which triggered Cleveland’s eight-game winning streak earlier this month.

“No, I can do it on my own,” James said of his role change. “I’m past those days where I have to ask.

Concerns supposedly stem from LeBron James’ comment that he was in “chill mode” after Friday night’s 98-89 win over the Orlando Magic. Following Sunday’s game, James said about the team, “Right now, we are not very good in every aspect of the game.”

Following Sunday’s loss, Blatt was asked if he could be losing control of the team to which he responded, “I’m not concerned about that at all. I’m more concerned with how we’re playing.”

During Monday’s practice, Blatt was asked if he had the team’s attention. “Absolutely I do,” said Blatt, who added, “We just didn’t play well. I don’t think it was an issue outside of that.”

James also denied any hint of a rift between Blatt and team, saying,

Regarding the early season struggles, James said, “People want instant success so much in our sport, and I think that’s too hard to ask for when a team comes together for the first time.”

“I’m happy with who we have at our helm,” James added, “…to make it a feud between me and Blatt or the team and Blatt is just to sell. It’s just to sell and get people to read it and put something on the bottom of the ticker.”

James’ “chill mode” Friday postgame comments came in response to his brief scuffle with Tobias Harris of the Magic. Following that incident, James put together a strong fourth quarter that helped the Cavaliers win by a 98-89 score.

In Sunday’s game, the Cavaliers saw a 28-17 first quarter advantage over the weak Pistons quickly disintegrate into a 103-80 loss. At one point, Cleveland had been outscored 67-22, falling behind 84-50.

Cleveland is 18-12 and in second place in the NBA’s Central Division, but trails four other teams in the Eastern Conference for the best record. The team has split its last 10 games, with two of the defeats coming in home court blowouts.

Last week, the team’s starting center Anderson Varejao, was lost for the season after suffering a torn Achilles tendon.