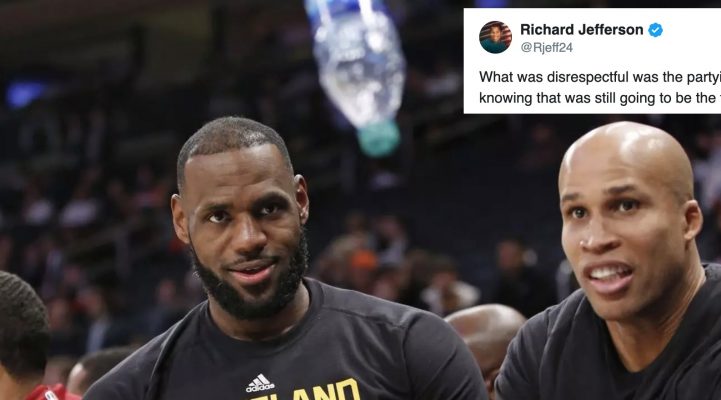 A blowout win by the Cleveland Cavaliers from nearly three years ago oddly became a source of social media criticism by a fan on Thursday.

That outrage was quickly doused with a savage retort from former Cavs forward Richard Jefferson, who then got an endorsement from close friend and former Cavs teammate Channing Frye.

The game in question was the Cavaliers’ Dec. 7, 2016 road contest at Madison Square Garden against the New York Knicks. In the final minute of their 126-94 victory, a number of Cavs players could be seen taking part in a water bottle flipping challenge.

For whatever reason, that fan decided long after the fact to attack those actions. It took mere hours for Jeffers to offer his rebuke.

What was disrespectful was the partying we did the night before knowing that was still going to be the final score ??? https://t.co/rjfc9qyXzU

Frye then added a joking confirmation a short while later.

I mean… your not wrong lol https://t.co/dW5ghU0uMb

In that game, Jefferson scored five points and grabbed three rebounds in 18 minutes of play.  Frye scored six points in 13 minutes on the court.

The Cavaliers had three scorers tally over 20 points in that game, with Kyrie Irving dropping 28, LeBron James scoring 25, and Kevin Love contributing 21.

Jefferson’s brutal assessment of how the Cavaliers viewed that contest was due to a couple of reasons. The first reason was because they were defending NBA champions at the time. The other dealt with the fact that they had won the previous seven matchups against the Knicks. The most recent victory against them had come in another blowout win on opening night six weeks earlier.

While with the Cavaliers, both Jefferson and Frye established themselves off the court as loquacious personalities.

That trait has allowed Jefferson to smoothly transition into a broadcasting career. While the recently retired Frye has yet to make any concrete post-career plans, there’s little question that a similar career path will be available to him as well.