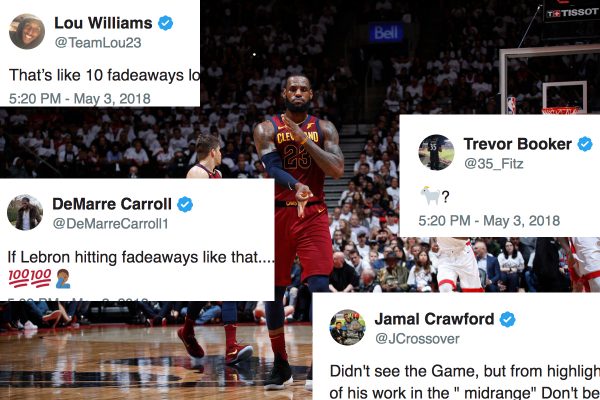 It was a game that showcased one of the best outside shooting anyone has ever seen from the King. By the time his virtuoso performance was over, LeBron James had delivered an impressive spectacle that led the Cleveland Cavaliers to the dismantling of the Toronto Raptors in Game 2 of the Eastern Conference semifinals with a 128-110 victory.

James’ turnaround, fallaway jumper was as sharp as it has ever been on Thursday night as he rained down multiple shots from the perimeter at Air Canada Centre. He finished the game with 43 points and 14 assists, just missing out on a second consecutive triple-double with eight rebounds.

According to the Elias Sports Bureau, James’ 43-point, 14-assist game was the first of its kind in playoff history.

Everyone was in awe of the four-time MVP’s shooting exhibition as opposing players, former teammates, fans and the media gushed at the masterpiece painted by one of the game’s greatest master artists. James trended on Twitter with NBA players tweeting as if they hadn’t gone up against the Cavs forward during the season.

Here are some of the awe-inspired thoughts and praises that players heaped upon the King:

Didn't see the Game, but from highlights seems like Bron did a lot of his work in the " midrange" Don't be fooled into believing it's all 3's or layups.

I know Lebron hit some crazy shots but the way he gets everyone involved and how he sets them up for good looks and looks for mismatches is amazing. He’s bball IQ is out of this world

This is amazing to watch man, nothing they can do about it when he makes those shots

If Lebron hitting fadeaways like that…. nobody can guard him…?????‍♂️

I don’t get it… are the coaches that stubborn that they rather bron go 1 on 1 instead of doubling him. If he get 40 you ain’t beating him. This bron different ?

Raptors just not going to get past bron ???

Yes esp mentally.. Bron has their number.. No one to really match up with him and hard to play a traditional 5 vs Bron esp with Love on the floor https://t.co/vN1mD2kZfc