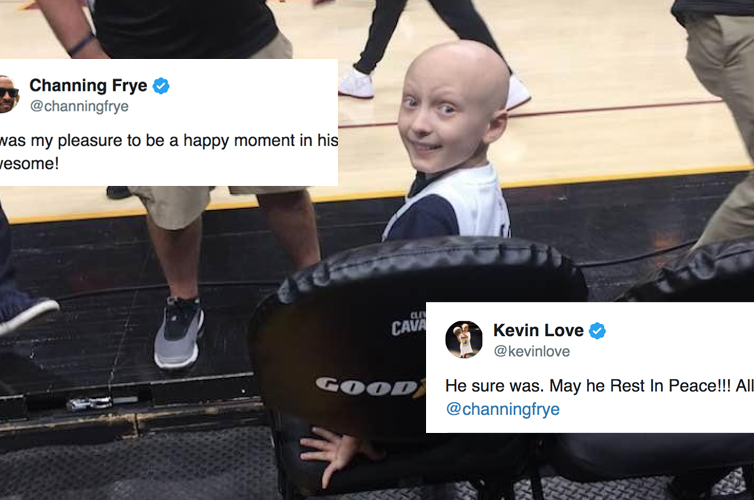 Basketball serves as simple entertainment for most, but for some it offers a reason to keep fighting. One of those who used basketball as inspiration to keep fighting his battle against cancer was fifth-grader and Cleveland Cavaliers fan D.J. Patterson.

Sadly, Patterson lost his battle to cancer over the weekend, but among the many who he inspired along the way were Channing Frye and Kevin Love.

Patterson got his own taste of NBA stardom back on Feb. 23 when Frye and Love helped him dunk a basketball prior to a NBA game.

What a moment! 10-year old D.J. Patterson of Louisville, OH, who is battling Ewing’s Sarcoma, was lifted by @KevinLove and @Channing_Frye to throw one down at The Q. #WhyWePlay #Cavs pic.twitter.com/N3Y1j4VaHN

When Frye heard of his passing, he took to Twitter to honor his memory.

It was my pleasure to be a happy moment in his life. He was awesome! https://t.co/t9ZByup2uf

He sure was. May he Rest In Peace!!! All love from both of us @channingfrye https://t.co/2UE3qG3rKE

It’s gestures like these that make Love and the recently retired Frye beloved both within and outside the Cavs’ locker room.

Though Patterson has tragically passed, it’s comforting to see that his memory will live on thanks to the likes of Frye, Love, and surely many more.