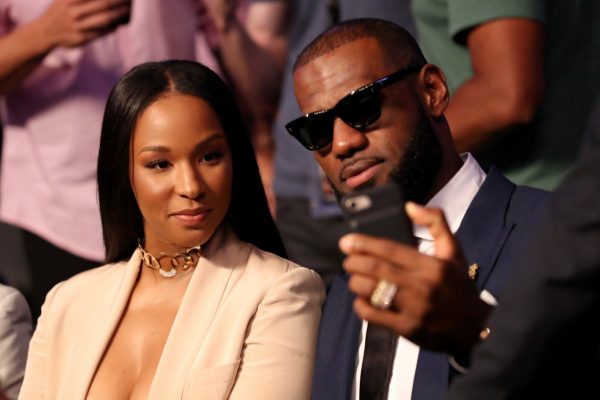 To most Cleveland Cavaliers fans, LeBron James‘ wife Savannah James is known for staying out of the spotlight. While other NBA wives don’t mind sharing the spotlight, Mrs. James prefers to let her husband capture all the glory while she focuses on raising their three children and giving back to her hometown community as a passionate philanthropist.

Savannah James did capture some of the limelight this month, however, when she was featured in Cleveland Magazine‘s Most Interesting People 2018 list. In the article, she discusses how she and her eventual husband met when they were just two kids living in Northeast Ohio.

“I’m like, ‘Um, nope. I’ll take his number,’” remembered Savannah. “One day I’m sitting around — I was probably bored or something — and I’m like, ‘Oh, I forgot! I have this number for this guy that I can call. He seemed interested, so let’s see.’”

She didn’t know much about her husband’s basketball phenom status, but that didn’t stop him from inviting Savannah James to one of his upcoming games. He then invited her to join him and a group of friends to a local Applebee’s, and then finally invited her to a one-on-one date. The rest is history.

“He is truly a king to his queen, if you will,” she said of their relationship. “He treats me with so much respect — I mean, it’s hard to not love him, with the way that he is with me and the kids and his mom and just everyone who’s around him. He’s a really, really humble guy for everything that he has and everything that he’s done.”

LeBron James is such a worldwide superstar that it often seems he is much larger than life. For his wife, however, it is clear that he is still very much that young man she met all those years ago. Cleveland is known for many things, but in this moment it might be most well known as the hometown of LeBron James. He can’t do it all alone, however, and it’s great to see the love and support system he has within his own family.

With a woman like Savannah James at his side, it’s no wonder why LeBron James has managed to succeed at such a high level both on and off the court.