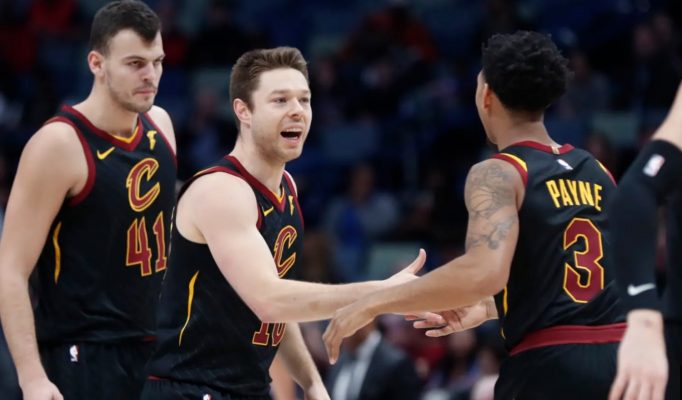 Cleveland Cavaliers veteran guard Matthew Dellavedova came up big in the closing moments of the team’s 104-101 road win over the Chicago Bulls on Sunday afternoon. That clutch performance got the attention of both head coach Larry Drew and forward Cedi Osman after the game.

Dellavedova put together a strong overall performance during the contest, giving the team some badly needed leadership, according to Drew:

“He was big. It wasn’t just what he was doing offensively as far as making shots, but he did a really good job of getting us organized and did a really good job on the defensive end just being scrappy. He was consistent with our coverages and going down toward the end there I just felt as well as he had been playing he needed to be in there.”

Drew’s other option would have been to use rookie Collin Sexton down the stretch, even though Dellavedova was outplaying him. That’s because Sexton’s continued development amid the wreckage of this season is important for the future of the franchise. However, getting any win after dropping 18 of the last 19 games was more important to Drew.

For Osman, it was Dellavedova’s leadership during the pivotal point of the game that stood out:

“I think he just stopped us from running all around and when he gets the ball in his hands he’s playmaking and he’s telling us where to go, what play to run and he’s just a great player and really great to have him in those situations. Obviously he has a lot of experience from those Finals and everything, but when he’s on the court he knows how to control the pace and knows how to control the game. He helped us a lot at the end.”

The 28-year-old Dellavedova spent his first three seasons in the NBA with the Cavaliers, standing out through his aggressive approach and work ethic. After helping the team capture the 2016 NBA title, he left as a free agent to sign with the Milwaukee Bucks.

Last month, the Cavaliers traded veteran guard George Hill to the Bucks as part of a deal that brought Dellavedova back to his original home. While some may have speculated at the time that Dellavedova’s popularity with the Cleveland fan base played a part in the decision to bring him back, it’s clear that he’s offering the team some valuable experience amid their misery.