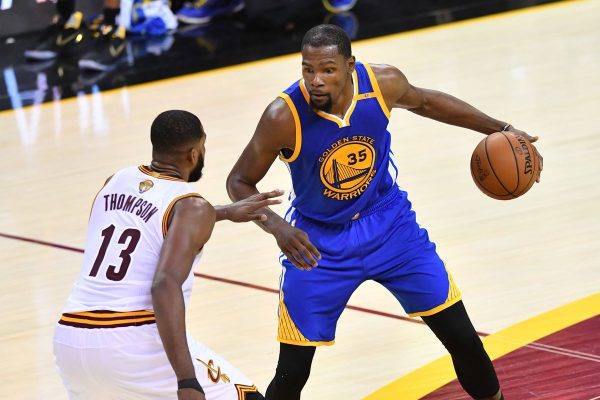 In an interview with Chris Haynes of Yahoo! Sports, Cleveland Cavaliers center Tristan Thompson offered his perspective on the last four years for the Cavs and notably described his reaction to when Kevin Durant joined the Golden State Warriors.

Both Thompson and Durant attended the University of Texas, and hence share a camaraderie over their alma mater. However, the former did acknowledge that Durant’s move changed the outlook for many teams in the NBA.

“It definitely shook the NBA world,” said Thompson. “I think every team in the West was like, ‘We got no chance.’ But that move worked out for him; he’s got two chips and two Finals MVPs.”

Durant’s move was not taken well by many NBA fans, many whom still use certain nicknames to describe him today. Nevertheless, it is still interesting to see how fans’ perceptions can be very different from players’ perceptions when it comes to evaluating a seismic move like Durant’s.

cleveland cavaliersfeaturedGolden State WarriorsKevin Durantnews tickerTristan Thompson
← Previous Story J.R. Smith Gives G.O.A.T. Shoutout to LeBron James on His Birthday
Next Story → LeBron James Told Cavs Not to Get on Plane If They Didn’t Think They Could Win 2016 Finals