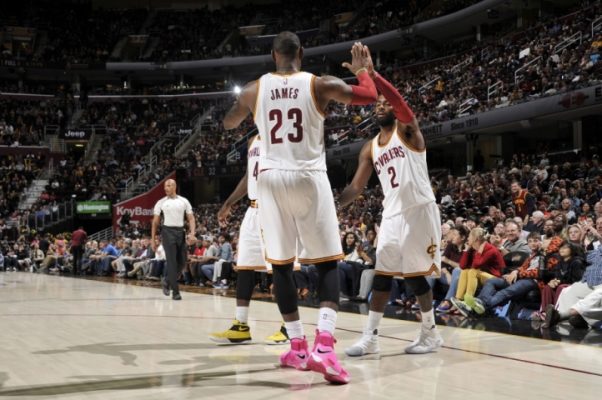 (Cleveland, OH) – Guard Markel Brown’s layup off rookie Kay Felder’s assist with 17.9 seconds remaining allowed the Cleveland Cavaliers to hold off a late charge by the Philadelphia 76ers and come away with a 108-105 victory at Quicken Loans Arena on Saturday night.

Following Brown’s basket, the Cavs defense stopped Philly, with Jordan McRae then hitting two free throws with 1.4 remaining to provide a three-point cushion. A desperation three-pointer at the buzzer for the 76ers then came up short to help Cleveland raise their preseason record to 2-0. Prior to those four points, the Sixers had charged back on a 22-10 run.

McRae led all scorers with 20 points, adding five rebounds and four assists in 29 minutes. Kyrie Irving made his first appearance of the season and matched teammate LeBron James with 15 points, as the two combined for five assists. Both players saw less than 20 minutes of action.

Channing Frye played just 11 minutes, but hit five of his six shots to finish with 14 points. After the game, he raved about the potential of Felder:

“We’re extremely impressed. He’s extremely humble, a hard-working kid,” Frye said. “He’s going to do really well in this system. I think he’s just a sponge and I’m excited to play with him.”

Frye also spoke about his role with the team:

“My job’s pretty simple: shoot it if they’re not close, and if they are, give it to LeBron or Kyrie,” Frye said.

Both teams had runs in the first quarter, with the Cavaliers’ 15-3 surge giving them an 18-8 advantage to start. However, the Sixers pushed back to hold a 27-26 lead by the end of the period. Philly pushed their lead up to as many as seven before the Cavs headed to halftime holding a 51-47 lead.

Playing without Tristan Thompson, who was resting an injured foot, the Cavaliers had their issues in the first half on the boards despite holding the 76ers to just 37 percent shooting. Thompson’s absence on the offensive side of the glass was noticed by Iman Shumpert when he was asked about the team’s play at halftime.

“A lot of sloppy possessions. We’re doing great on the first stops, but they’re getting a lot of offensive rebounds,” Shumpert said. “We’ve got to clean that up. If we clean that up and keep pushing the ball, we’ll break this open.”

Shumpert’s words were fairly prophetic during the third quarter as Cleveland led by as many as 15 points and maintained a double-digit advantage for most of the second half. However, with the Cavs leading 94-83 with 8:29 to go, the Sixers made their final push.

The Cavaliers will play their first preseason road contest on Monday night when they head to Atlanta to face the Hawks. Tipoff for that clash will be just after 7:30 p.m.