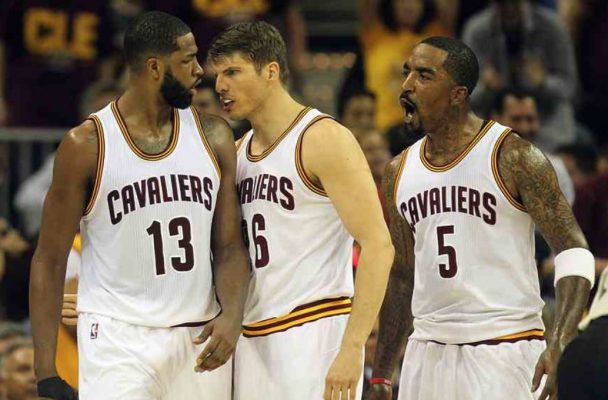 While the Cleveland Cavaliers’ trade of Kyle Korver was largely expected, the reality of the news still struck a chord with players on the team. They were upset at losing a player who’s still contributing despite the miserable 4-16 start of the team.

Joe Vardon of The Athletic looked at the aftermath of the trade and offered insight into why those veterans weren’t happy about the Korver deal:

“Multiple Cavs players are upset with the trading of Korver, insofar as this is a team with very little outside shooting. Korver’s only averaging 6.8 points per game, but he’s still shooting .463 from the outside and is one of the greatest 3-point shooters in NBA history. Subtracting him from the team only makes it harder to win games, they feel.”

Prior to the start of the season, the Cavaliers had indicated that they were planning on competing for a playoff spot. However, the combination of injuries and trying to fill the gaping hole left by the departure of LeBron James, has quickly turned the campaign into one that’s focused on rebuilding the franchise.

One aspect of the Korver trade that was appreciated by players was the Cavaliers dealing him to a team and city where he and and his family were comfortable. The veteran played parts of three seasons in Utah a decade ago and met his wife, Juliet, while playing there. Center Tristan Thompson noted that Korver’s professionalism and approach to the game were key reasons why the Cavs took such connections into consideration when making the deal:

“I think it’s because he earned that respect from the franchise. When you come in every day and do the right things as a pro, work your butt off and you don’t do nothing to jeopardize the organization, they are going to look out for you.”

One of the Cavaliers’ newest additions this season, top draft pick Collin Sexton, was only a teammate of Korver for 20 games. However, it’s clear that the 19-year-old rookie had already forged a strong bond with the 37-year-old veteran:

“I respect my boy Kyle. What doesn’t he do right?”

An indication of why Korver has attained such respect both on and off the court can be seen in his parting statement to the Cavaliers fan base and the community at large:

“I think just overall I’m really grateful for my time in Cleveland. So many amazing opportunities. Incredible teammates. Relationships that I’ll take with me for the rest of my life. The fans have really embraced me and my family. I’ve never heard ‘thank you’ so many times from fans, even after harder moments.

“Cleveland fans are who you want to play for.”

Those fans will be able to cheer Korver again when he and the Jazz come to Quicken Loans Arena on Jan. 4, the team’s only game in Cleveland this season.