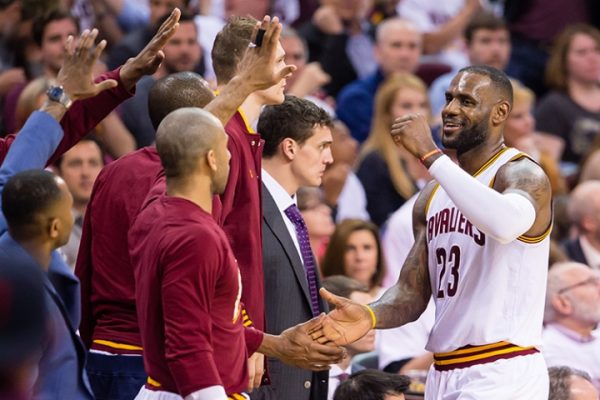 (Cleveland, OH) – Tying an NBA playoff single-game record with 20 3-pointers on the night, the Cleveland Cavaliers bounced back from a sluggish first half to knock off the Detroit Pistons, 107-90, at Quicken Loans Arena on Wednesday night. The victory gives them a 2-0 lead in the first round of a best-of-seven playoff series.

The trio of LeBron James, J.R. Smith and Kyrie Irving combined for 70 points on the night, connecting for 13 of the team’s 20 3-pointers. The 3-pointer that tied the playoff record was launched by Jordan McRae with 26.9 seconds left.

“We were on fire, making shots. It’s a crazy tale of two games,” Irving said afterwards. “We don’t want to become too reliant on it, but when you have great shooters like that to space out the floor really well, it makes the game a lot easier.”

In addition, Kevin Love collected another double-double with 16 points and 10 rebounds, while Matthew Dellavedova scored eight and also handed out eight assists.

“I thought we did a good job of shooting the ball,” said Cleveland head coach Tyronn Lue. “I wouldn’t say it was our best game, but I thought the second half was the way we want to start.”

For the second straight contest, the Cavaliers got off to a slow start, falling behind 17-7. Over the next few minutes, Irving delivered eight unanswered points to slice the deficit to a single basket. After a 9-2 Detroit run, the Cavs started up its 22-6 run that extended into the middle of the second quarter.

The keys to that run were James and Smith, who combined for all but three of the points. Still, the Pistons charged back and held a 53-50 lead with 1:37 left before intermission, but a Dellavedova three-pointer and a James putback with 28.8 seconds remaining sent the Cavs into halftime with a two-point lead at 55-53.

“I shot pretty good, ‘Bron shot the hell out of the ball, Ky had a hell of a game with the three in the first half. When we move the ball like that, we’re tough to beat,” Smith said after the game.

Asked about the first-half issues, Lue compared the circumstances to Game 1:

“It happened last game. I just knew we had to pick it up. We just have to do a better job of locking them down on offense.”

The key stretch of the game came in the final 9:12 of the third quarter, with Cleveland trailing, 60-55.  At that point, the Cavs unleashed a 27-8 run and ended the period ahead by an 82-68 margin. A nearly-six minute stretch during that surge saw the Pistons miss seven straight shots and commit four turnovers, with Detroit finishing the quarter shooting just 35 percent.

In the fourth quarter, the Cavaliers twice boosted their lead to as much as 19, with Detroit never mounting any serious threat.

“I’m a true believer in the ball having energy, and when you have guys making shots, it’s a conscious effort by me to not fall into it,” James said. “When my shooters have it going, I have to be the one to say, ‘You need to get to the rim. You need to continue to put pressure on the defense.’ I don’t want to add to the burden of us just casting 3-point shots.”

Playing 40 minutes in each of the first two games left James unconcerned about any negative cumulative effect:

“Every single game, I’m prepared to play 48 minutes if Coach needs me,” James commented. “I’m ready for the long haul.”

After getting in some early foul trouble, Tristan Thompson was limited to just 2:35 of action in the first half. His presence on the boards was missed, with the Pistons holding a slim rebounding advantage at the break. Even after returning, he only saw 11 more minutes of action and was held scoreless with just a single rebound.

“We did what we were supposed to do and took care of home court,” Lue said.

The series now moves to The Palace of Auburn Hills on Friday night for the first of two games on Detroit’s home court. Tipoff will take place just after 7 p.m.