J.R. Smith Gets Into Heated Twitter Debate With Stephen A. Smith 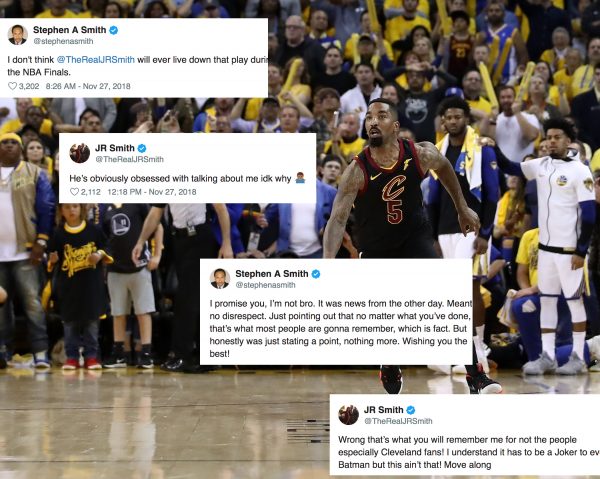 Two people in the world of basketball who are known to speak their minds are J.R. Smith and Stephen A. Smith, and on Tuesday night, the two got into a war of words on Twitter.

The back-and-forth began when the famed sports analyst tweeted about the Cleveland Cavaliers shooting guard’s blunder at the end of Game 1 of the 2018 NBA Finals.

I don't think @TheRealJRSmith will ever live down that play during the NBA Finals. pic.twitter.com/ZmUvk0v3pJ

“It’s not just the mistake that he made,” Stephen A. Smith said on ESPN’s “First Take.” “It’s the visible reaction from LeBron [James] that you will always hold onto.”

It didn’t take long for the veteran shooting guard to get wind of the conversation.

He’s obviously obsessed with talking about me idk why ??‍♂️

Stephen A. Smith then seemingly tried to dampen the flames by responding.

I promise you, I’m not bro. It was news from the other day. Meant no disrespect. Just pointing out that no matter what you’ve done, that’s what most people are gonna remember, which is fact. But honestly was just stating a point, nothing more. Wishing you the best! https://t.co/hVdcq2HH0z

It was then that Swish unleashed a haymaker tweet in response, letting Stephen A. Smith know that he is not to be tested when it comes to trolling.

Wrong that’s what you will remember me for not the people especially Cleveland fans! I understand it has to be a Joker to every Batman but this ain’t that! Move along https://t.co/uAerV3TMqI

Whatever Stephen A. Smith believes, J.R. Smith has a point.

While the Game 1 blunder will certainly be fodder for sports analysts for year to come, faithful Cleveland fans will always remember J.R. Smith parading through downtown Cleveland shirtless, celebrating the 2016 NBA championship.