J.R. Smith Discusses the Good and Bad of Playing With LeBron James 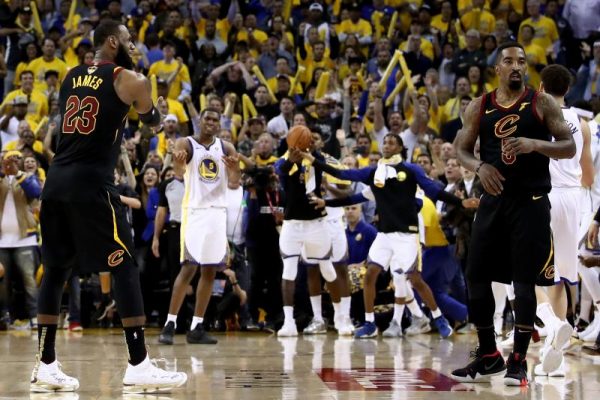 A whole host of different players have been teammates of Cleveland Cavaliers forward LeBron James during his 15 seasons in the NBA. Over the past eight years, that’s meant a trip to the NBA Finals for most of them, whether they played for either Cleveland or the Miami Heat. However, the connection also brings added pressure, something that J.R. Smith spoke about on Saturday while also adding a little humor to the topic.

JR Smith on what it’s like to play with LeBron James … pic.twitter.com/9IFYwlFehL

When the 32-year-old Smith was dealt from the New York Knicks to the Cavaliers in January 2015, his past reputation made the Cavs’ front office wary of acquiring him. James indicated at the time that he would keep Smith in line, a promise that’s largely been kept and helped in bringing the franchise its first-ever title the following year.

The pressure that Smith spoke of is squarely on his shoulders as the Cavaliers and Golden State Warriors prepare for Game 2 on Sunday night. That’s connected to his mistake of dribbling away from the basket in the closing seconds of the 124-114 overtime loss, which cost the Cavaliers the opportunity to win the game. As time expired, James was visibly upset at Smith for his blunder, but refused to discuss his feelings on the play during a postgame press conference. Instead, the veteran simply walked out.

One way for Smith to at least temporarily stop the conversation about his miscue is to deliver a strong performance in Game 2 that results in a Cleveland win. Two years ago, Smith delivered a pair of clutch efforts in the Finals: the first coming in a 20-point performance in Game 3 and the latter, scoring 14 points in the titanic Game 7 clincher. The Cavs and their fans would no doubt appreciate a little deja vu.