Kyle Korver Compares Life With and Without LeBron James 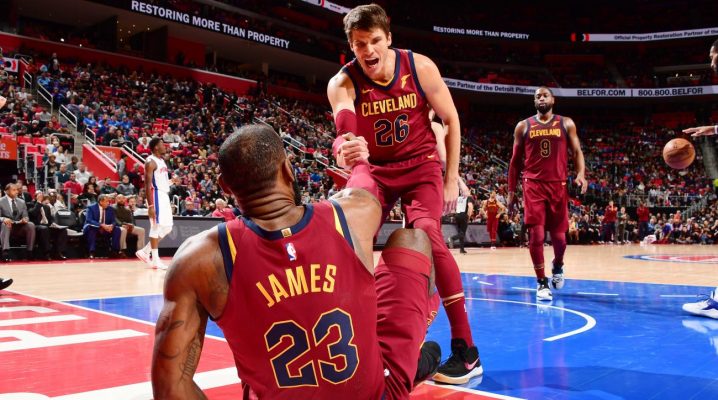 Cleveland Cavaliers veteran Kyle Korver is experiencing life without LeBron James by his side after being with him for two trips to the NBA Finals. In a new interview, the veteran talked about the sharp contrasts that exist between those two situations.

Steve Aschburner of NBA.com interviewed Korver during the team’s trip to Chicago over the weekend. He asked Korver what the difference was between a James-led team and one without the four-time MVP.

“LeBron carries a certain weight,” said Korver. “You feel him all the time. On the court, off the court, in the organization. I don’t say weight in a bad way, but his presence is always felt. He is striving for greatness at all times. Because he’s such a magnetic personality and such an incredible basketball player, people follow him. They look to him to lead the way. He was here for, how many years? So we have to create new leadership. Our own way. None of us is LeBron, on the court or off the court. There’s an adjustment period for us all, to find our way, to find our voice. That takes time, because he filled all the gaps.”

When James departed, the Cavaliers’ organization was under the belief that they’d be able to weather such a steep loss. That’s because of the veteran talent that remained on the roster, which included not only the 37-year-old Korver, but players like power forward Kevin Love and point guard George Hill.

However, the Cavaliers are in the midst of a disastrous 1-11 start. One reason for that miserable beginning is due to an injury to Love, who’s expected to miss at least another month of action.

Such circumstances are rumored to have ramped up trade talks involving Korver, with the Philadelphia 76ers reportedly making an offer. Such negotiations may drag on for a while, since the Cavaliers would like to get as much compensation as they can for the veteran. Any such deal might conceivably not occur until the February trade deadline.

Korver was brought in by the Cavs in a January 2017 trade to try to win an NBA title. That didn’t occur in Cleveland, but a potential trade this season can offer him a much better chance before he announces his retirement.