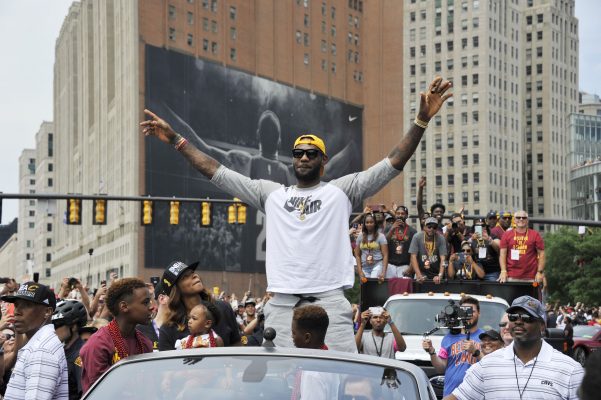 While most fans of the Cleveland Cavaliers are sweating the possibility of LeBron James leaving for reasons that exist on the court, there are surely a large number of people who are worried about the impact off the court as well.

Though he may not show it, one of those probably worried about the financial impact of James’ potential departure from Cleveland is Cavs owner Dan Gilbert. That’s because, according to a recent report, the Cavs would decrease in value by hundreds of millions of dollars should James decide to sign elsewhere this offseason.

ESPN senior writer Darren Rovell broke down just how huge of a financial impact James leaving would have on the team.

“James is the most valuable free agent in the history of sports,” Rovell wrote. “When he took his talents to Miami and left Cleveland in the summer of 2010, the franchise value, according to Forbes, dropped from $476 million to $355 million in a single year. If James left this time around, and a 25 percent drop happened again, the loss at current Forbes values would be more than $300 million.”

Rovell went on to explain that the financial hit would not only impact the team itself, but the entire area of downtown Cleveland:

“To understand how important LeBron is to Cleveland, one first has to understand that he helped build the modern-day version of the city — or at least the immediate downtown surrounding Quicken Loans Arena.

“What downtown Cleveland looks like is very different from what it looked like when LeBron was drafted in 2003. The city’s well-known chefs, including Jonathon Sawyer, Michael Symon and Rocco Whalen, made their moves. New bar life surrounded their establishments.”

“In the first seven years LeBron was here, he gave business people the confidence to double down and invest,” Roman said. “It changed the energy behind the decision-making process.”

The Greater Cleveland Partnership has never put a number on James’ value to the city, but Roman said that it’s in the “hundreds of millions of dollars.”

As for Gilbert, he has at least financially protected himself from James’ departure in terms of ticket sales.

“Gilbert has protected himself in some fashion,” Rovell explained. “The most valuable seats in Quicken Loans Arena were sold on a three-year minimum for 2019 through 2022, and there’s no discount if LeBron isn’t there. Gilbert also used LeBron coming back to help finance a $140 million renovation, regardless of whether James is playing in town.”

In the end, James cannot be expected to stay because of the negative impact his departure could have on the team or city. As a player, James has done everything he set out to do with the Cavs when he brought an NBA championship to Cleveland in 2016. He has also made it clear that he is still in search of more championships before his storied career comes to an end.

Whether or not that search keeps him in Cleveland remains to be seen.