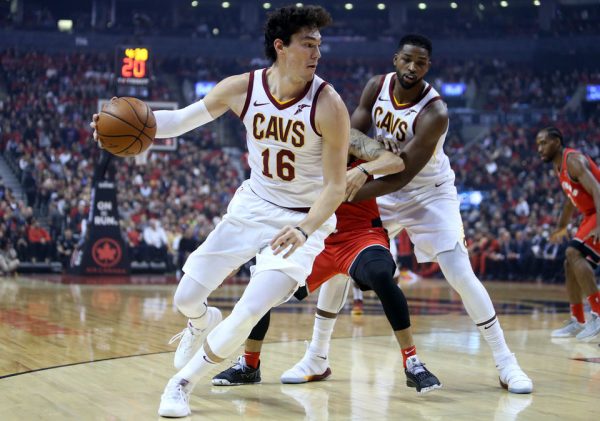 Despite the seeming doom and gloom that’s brought back nightmares of the Cleveland Cavaliers‘ disastrous 2010-11 campaign, the team’s current 0-3 start hasn’t dimmed the optimism of Cavs forward Cedi Osman.

The second-year man used social media to offer some hope to those fans who remember what happened in the wake of former Cavaliers forward LeBron James‘s first departure from the team back in 2010.

If there is no struggle, there is no progress. We are fighting, we are trying to do our best. We are a good team and good results will come soon. #TheFirstCedi

Osman is in the difficult position of taking over the starting role of James, who left in July to play for the Los Angeles Lakers. In his first three games this year, Osman has had his ups and downs, averaging 17.0 points, 5.3 rebounds and 5.3 assists per game. On the down side, he’s committed 11 turnovers and the Cavs have lost by an average of 14 points per contest.

When James left for Miami eight years ago, the Cavaliers endured a horrific 19-63 campaign that first season, which included a 26-game losing streak. That marked the first of four consecutive non-playoff seasons in which the Cavs won just 31 percent of their games and managed to earn the top selection in the NBA draft three times.

The likelihood of that taking place again doesn’t seem strong, but the Cavaliers definitely need to improve in a number of different areas. One of those relates to their performances during the second quarter, where they’ve been outscored by an average of 13 points per game during  those 12 minutes. Another relates to the team’s defense in general, which has allowed just under 127 points per contest thus far.

Osman and the Cavaliers will have another opportunity to capture their first victory of the season on Wednesday night, when they host the Brooklyn Nets at Quicken Loans Arena.