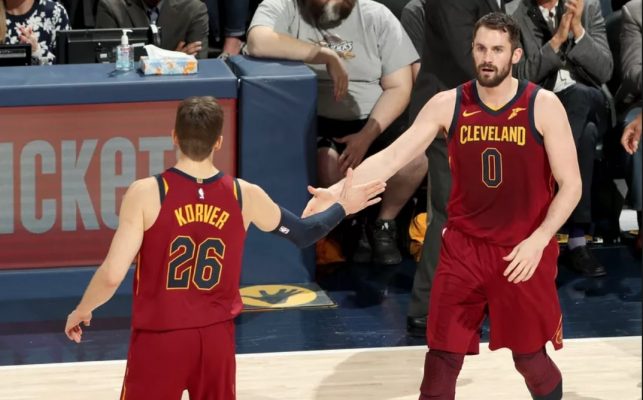 Korver described his feelings about his new role with this young Cavaliers squad, and made several points clear when it comes to his expectations on the offensive end.

“Not that I hated it before,” Korver said. “I like basketball. But I definitely like to move. That’s a big part of my game and it always has been. Running around and trying to create offense with energy.”

Cavs head coach Tyronn Lue was quick to point out Korver’s excitement and comfort within the new-look Cavs team.

“He loves all the movement and running around,” Lue said. “He’s in heaven right now.”

Back when LeBron James was on the team, the Cavs were built to let and help James be great, according to Korver. This was especially evident during the playoffs. But with James’ departure and all the recent personnel moves and additions, Korver feels that the Cavs could be headed in a different direction this year, strategy-wise.

“I think bringing in new personnel, bringing in young energy, coaching staff has been great, so much teaching and you can tell they put a lot of time into how they can make this team into the best we can be,” Korver said.

“Got a lot of new thoughts and taking some of our old stuff and tweaking it. Some of it is we have a bunch of actions that we want to try to get really good at. Been a lot of learning, teaching, a lot of movement and it’s really fun basketball.”

Furthermore, Kevin Love is slated to be the Cavaliers’ first option this year, which means the offense will be largely constructed around him. Many of the sets this season will have three or four options, which necessitates quick decision-making. This new Cavaliers offense may also feature more screening and moving off the ball, which should only benefit Korver.

Per NBA.com, Korver had plenty of shooting space last year; 66.3 percent of Korver’s shot attempts were considered open (the defender two to four feet away) or wide open (the defender four to six feet away). Much of this was attributed to the passing skills of James and the defensive attention he garnered.

It will be interesting to see the percentage of open looks that Korver will have this year, which will largely depend on how well the Cavs move the ball. Many Cavs players, including Larry Nance Jr., have emphasized the importance of stepping up and having multiple playmakers in the absence of James.

Korver was acquired by the Cavs via trade back in January 2017, and has remained an extremely valuable piece on the team due to his elite shooting and veteran experience.