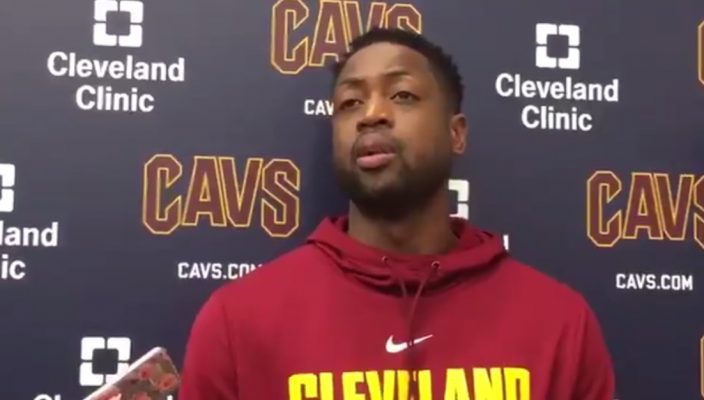 The slow start of the Cleveland Cavaliers has them currently the holders of a 3-5 record and a four-game losing streak. The team’s goal remains reaching the NBA Finals for a fourth consecutive season, with veteran Dwyane Wade comparing this year’s squad to the 2013-14 Miami Heat, who did reach the Finals for a fourth straight year. That season marked the last time that Wade and LeBron James played together prior to this year’s reunion.

According to Dwyane Wade, the Cavs will have an extremely difficult road to get back to the Finals for a fourth straight season. #Cavs pic.twitter.com/E15ngDCF93

“That last year in Miami when we went to the Finals, I don’t know how we made it,” Wade said. “As a team, we were kind of like this. It was worse because it wasn’t new guys, it was guys who had been around each other for four years in a row. So the same jokes wasn’t funny anymore. You know, you walked in, it wasn’t a big smile no more. Guys was just over you, it was like being in a bad marriage. But we somehow made it to the Finals.

“Indiana should have beat us, but we had a mental edge over those guys. We shouldn’t have been there. It’s tough, definitely, and that’s why it hasn’t been done a lot. For the guys that’s here, you have to pull from something else to motivate you, to feel that hunger again like you had that first year. I mean that’s sports, it’s tough. But with the new guys here, we’ve got guys that’s never been, guys that’s hungry. Obviously Isaiah’s (Thomas) one of them who’s out, but Jae (Crowder), Derrick (Rose), you know guys that’ve never been.”

Like his close friend James, Wade has three NBA championship rings, the first coming in 2006, when he combined with former Cavalier Shaquille O’Neal to defeat the Dallas Mavericks in six games.

The Cavaliers will try and get back on the winning track on Friday night when they travel to face the Washington Wizards. Two home games will follow before a four-game road trip begins in Houston on Nov. 9.