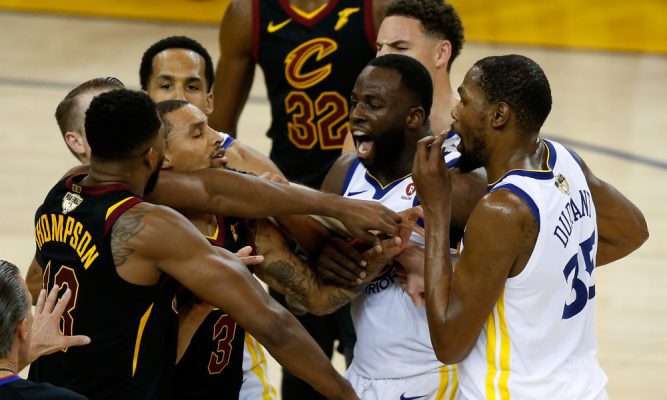 At this point, the news regarding the alleged fight between Tristan Thompson and Draymond Green is somewhat muddy.

The initial reports that the two NBA big men got into a fight at an ESPY afterparty seemed pretty convincing, but then Green took to Instagram to claim that the initial story was inaccurate.

Draymond just addressed altercation with Tristan on his IG story and not done throwing punches pic.twitter.com/xEnOz62y6p

Green’s posts raised questions about whether or not the fight had happened at all. Considering the most recent revelations from that night, however, it seems quite clear that the fight definitely took place. It also seems as though Green might have been asking for it.

According to ESPN’s Pablo Torre, Green teased Thompson about his drama with his significant other Khloe Kardashian and LeBron James‘ departure from the Cleveland Cavaliers before the tussle began.

“uh oh, pablo made some calls about the tristan/draymond fight…” #highnoon pic.twitter.com/9oCpdejTBz

“What I have learned, talking to people that I trust in these circumstances, is that Draymond was teasing Tristan Thompson at multiple locations that night,” he said. “It turns out that there was a party at Highlight Room that LeBron was having. Tristan and Draymond were there.

“Draymond may or may not have been saying things along the lines of Khloe Kardashian jokes, jokes about how now that LeBron has left Tristan that his career is on the outs. And then there was the second location, Bomani, Delilah in Hollywood and it seems to be another LeBron-type event. And this is where the face-mushing happens. And I would clarify that there were exchanges, I was told – exchanges verbal and physical. It wasn’t a one-sided thing.”

Considering everything we know about the relationship between Thompson and Green, this account seems quite easy to believe.

All that’s left now is to find out whether or not Green denies this report as well.