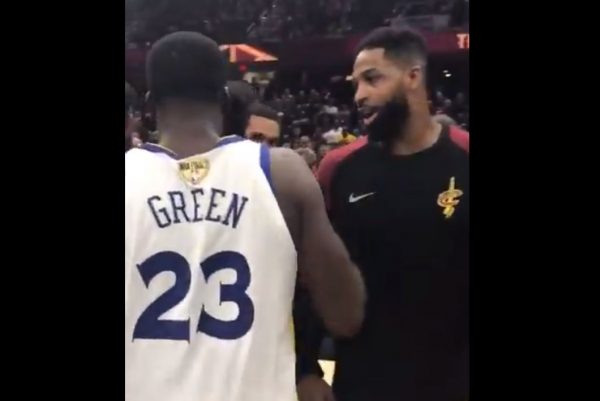 Near the end of overtime in Game 1 of this year’s NBA Finals, Golden State Warriors forward Draymond Green and Cleveland Cavaliers center Tristan Thompson nearly engaged in an on-court brawl. When the series ended in a four-game sweep for the Warriors eight nights later, some of those emotions lingered as Green refused to shake Thompson’s hand as he walked past him to celebrate with teammates.

“I don’t fuck with you”… Dray to TT after the Finals Sweep… @Sixfever pic.twitter.com/ald7LkRckz

In the Game 1 incident, Thompson took exception to remarks from Green after he was ejected and proceeded to push the basketball into Green’s face. After Green charged Thompson, the two had to be separated before Thompson was led off the court. At that point, Green mockingly waved to him.

Earlier in that game, Green also was involved in another situation with the Cavs’ LeBron James. Green poked James in the eye near the Cavaliers’ basket, with James commenting about still having blurry vision after the contest. The visible reminder of Green’s poke was something that lingered throughout the remainder of the brief series.