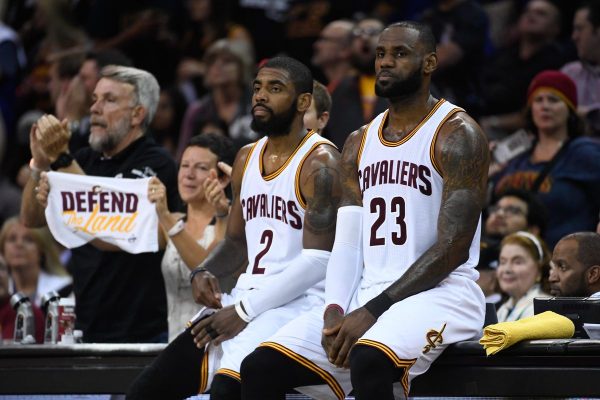 In a stunning roundtable discussion among Jason Lloyd of the Athletic, Dave McMenamin of ESPN, and Joe Vardon of Cleveland.com, much was revealed about Kyrie Irving and his deteriorating relationship with the Cleveland Cavaliers and especially LeBron James.

“It has been made clear to me by multiple people, Kyrie never really wanted LeBron to come back (to Cleveland) in the first place,” said Lloyd. “He didn’t think it was necessary. LeBron said something to Kyrie on the court following a game when he was with Miami something to the effect of, ‘Keep going, keep doing what you’re doing. You never know, I could be back here one day.’ And Kyrie basically said, ‘What’s he talking about, we don’t need him.'”

Slowly after James returned to the Cavs in 2014, Irving slowly became more and more irritated with the fact that James was receiving a majority of the credit and attention on several levels. Things got so bad that Irving and his camp considered requesting a trade immediately following the 2016 NBA championship, when the Cavs historically came back from a 3-1 deficit to defeat the Golden State Warriors.

Irving was also not fond of the Cavs organization and its front office. In addition, he reportedly didn’t like former Cavs head coach Mike Brown, and especially didn’t like Tyronn Lue, who said that Irving basically treated him like a stranger since day one.

While most had initially pointed the finger at James for driving Irving out of town, it’s become clear that Irving himself had several issues with the entire Cavs organization.