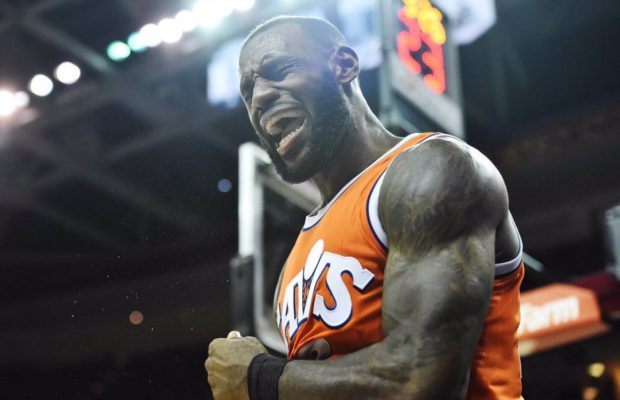 (Cleveland, OH) – Behind a season-high 44 points from LeBron James, the Cleveland Cavaliers shook off a near-disastrous third-quarter slide to pick up their fourth consecutive win with a 116-105 victory over the Charlotte Hornets at Quicken Loans Arena on Saturday night.

“Mind over matter,” James said after the game in reference to his ability to score on the second night of a back-to-back. “I knew this was going to be a tough game.”

James led all scorers, hitting 17-of-24 from the field, including five 3-pointers. For good measure, he picked up a double-double by adding 10 assists, narrowly missing a triple-double with nine rebounds.

The Hornets trailed 67-52 to start off the second half and began an 18-6 run to slice the Cavaliers lead down to three at 73-70. After missing the opportunity to cut the margin to one, the Hornets watched the Cavs run off eight straight points to seemingly take back control.

However, Charlotte answered by scoring seven of the next eight points before Cleveland closed out the period by scoring eight of the last nine for a 92-81 lead. During those 12 minutes, the Cavaliers managed to shoot just 33 percent from the field. In the fourth period, the Hornets never managed to get closer than seven points.

“They (Charlotte) caused a lot of problems, but I’m glad we were able to stop them tonight,” James said.

The third-quarter performance was in stark contrast to Cleveland’s first-half output, when they connected on 70 percent of their outside shots. The Cavaliers began their torrid shooting by hitting 15-of-21 from the field in the opening quarter before adding a 13-for-19 effort during the second period.

“It was big for us,” Love said about the first-quarter shooting. “We wanted to come out and set the tone and be super-aggressive.”

The Cavs managed to connect on 54 percent of their 3-pointers during the opening two periods and had excellent ball movement during that stretch by dishing out 19 assists, before finishing with 25 on the night.

With just under five minutes left in the first quarter, the Cavs held a slim 20-17 advantage before closing out the period by outscoring the Hornets, 16-9, to hold a 36-26 advantage. That surge continued throughout the next period, with Cleveland leading by as many as 19 before heading to intermission with a 67-52 lead.

“Guys were telling me their legs were heavy,” Cavs head coach Tyronn Lue said. “But LeBron told me, ‘I’m fine,’ and then he started raining threes.”

Kevin Love contributed 22 points and six rebounds, while Iman Shumpert added 16 points and five boards on the night. Joining James in the double-double category was Tristan Thompson, who scored 13 and cleaned 12 rebounds off the glass. Rounding out the double-figure scorers was Kyrie Irving, who struggled with his outside shot while picking up 11 points and five assists. The sixth-year point guard connected on just 31 percent of his shots.

“That’s the luxury of having the great team that we have, that I can have an off night and we still win,” Irving said.

The clutch performance by James made him the first player in NBA history to score 27,000 points, grab 7,000 rebounds and dish 7,000 assists.

“They’ve made those shots. I don’t get the assists without those guys making the shots,” James said about his latest milestone. “I just try to put the ball where all they have to do is catch and shoot. I give all the credit to my teammates and all the coaches I’ve had over the years because they put the work in and the ball goes through the hoop.”

After playing on consecutive nights, the Cavaliers will now have two nights off before resuming play on Tuesday evening at home against the Memphis Grizzlies. Tipoff for that game will be just after 7 p.m. ET and is the front end of a rare back-to-back matchup against a Western Conference opponent. The rematch takes place in Memphis on Wednesday night.