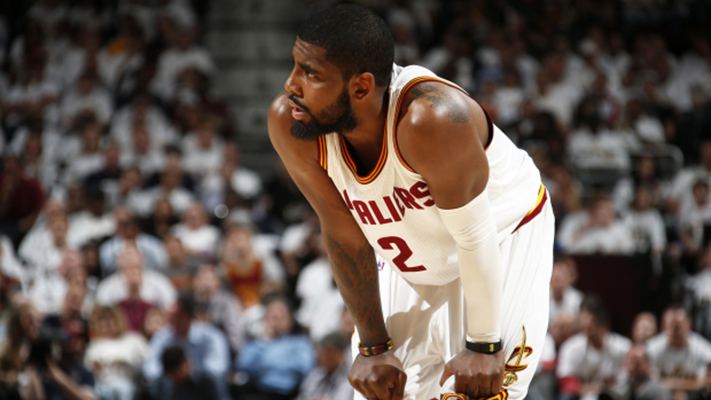 The last time we saw Kyrie Irving, he was hobbling from Oracle Arena during Game 1 of the NBA Finals.

Fast forward nearly two months later, and Irving is back on a basketball court. The Cleveland Cavaliers guard spoke Saturday afternoon from Mentor High School, the site of this year’s Kyrie Irving ProCamp, where he and a group of the area’s top high school and college basketball coaches led a camp of 550 kids ranging from the 1st to 12th grade.

Irving stated it wasn’t long after suffering a fractured left kneecap that he began working out again:

“I only had the cast on for two weeks. Then I was in a brace. Once I got clearance from our doctors that I could actually start working out and put pressure on my leg I relish that.”

He still believes that had he been healthy for the entire NBA Finals, that the Cavs would have defeated the Golden State Warriors:

“Absolutely. Being a confident basketball player and knowing what we had with our team, it was obviously tough, but I know all of us and the guys that are coming back, we haven’t forgotten what happened. A great Warriors team won the Finals and all credit goes to them but our ultimate goal is still a championship, bring it to Cleveland.”

Irving has spent most of the summer rehabbing in Miami at Pinecrest Physical Therapy. General Manager David Griffin had told reporters in Las Vegas two weeks ago that the 23-year-old point guard was progressing well.

While there’s plenty of work to do in fully rehabbing from surgery, Irving looks forward to following up on a 2014-15 season that saw him named to the All-NBA Third Team:

“Nothing hard about it (rehab). Just knowing why I get up every single morning. Just my passion for the game and what we have to get ready for going into next season.”