Report: LeBron James, Kawhi Leonard, and Paul George Have Been in Contact 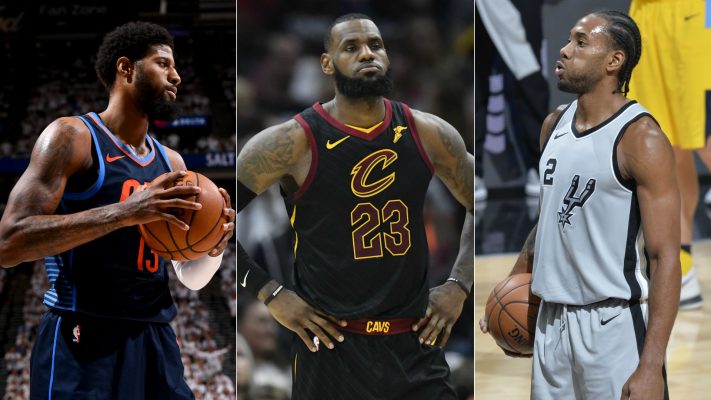 With the recent reports that San Antonio Spurs star Kawhi Leonard has requested a trade, it is clear that the 2018 offseason has officially arrived.

While Leonard could be on the move in a matter of days, LeBron James will remain a member of the Cleveland Cavaliers at least until the NBA’s free-agency period begins on July 1. Still, that doesn’t mean the two stars haven’t been in contact about their respective futures.

According to ESPN’s Brian Windhorst, James, Leonard, and even fellow All-Star Paul George have likely been in touch.

“Well I’ve been convinced for months that Kawhi and LeBron are connected. Where Kawhi goes will affect LeBron. Not necessarily that they would be teammates with each other, but it could block options that LeBron would have,” Windhorst explained. “But one thing I can tell you, I’ve got to believe that LeBron James and Kawhi Leonard are in touch during this process, and Paul George. This is the time of year when free agents and potential guys that can get traded do business with each other. So my guess is if they haven’t been talking, they will be talking to see if there is a way that they can match up, or a way they can stay apart.”

Windhorst continued to say that while many believe the three stars are going to end up together on the Los Angeles Lakers, he’s not so confident.

“I know that a lot of people are assuming that these guys are all going to end up with the Lakers together,” he said. “I think that’s a long shot at this point.”

This is an undeniably exciting, if not a bit nerve-racking time of year for NBA fans everywhere. While the Cavs could make a push to pair Leonard or George with James in Cleveland, this summer could also end with James deciding to continue his career elsewhere.

Here’s hoping that the NBA’s next superteam will be in Cleveland rather than Los Angeles.