How the Cleveland Cavaliers Can Acquire Kawhi Leonard 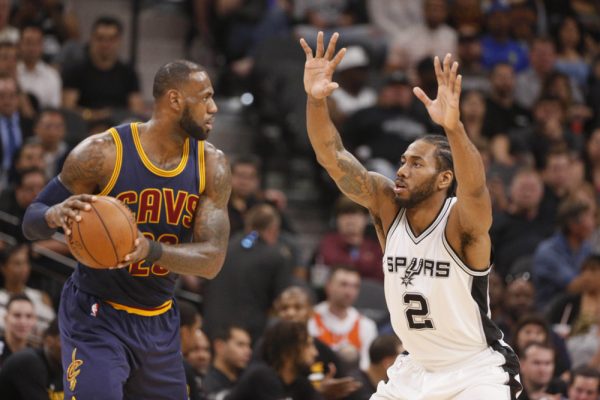 The disintegrating relationship between the San Antonio Spurs and their star forward Kawhi Leonard appears likely to end in a trade of Leonard during the offseason. The two sides have feuded over much of the past year after the 26-year-old Leonard struggled to come back from an injury to his right quad.

Teams considering putting together trade packages in order to acquire Leonard will have to dig deep. That’s due to his body of work that’s included winning NBA Defensive Player of the Year twice and being named the 2014 NBA Finals MVP.

Dan Favale of Bleacher Report offered some realistic trade scenarios connected to the teams most likely to make such a deal. Among those franchises mentioned are the Cleveland Cavaliers, who could conceivably turn a trade of this magnitude into something that can entice the team’s pending free agent LeBron James to re-sign with the team.

Hill and Nance joined the Cavs in February in separate deals at the trade deadline, while Korver and Osman are on the opposite ends of the spectrum. Korver recently finished his 15th season in the NBA, while Osman just closed out his rookie campaign.

One consideration that will make the Cavaliers and any other team think before they pull the trigger on such a deal is Leonard’s status beyond next year. He has a player option to become an unrestricted free agent next season, which he’s expected to exercise. That could make those teams reluctant to follow through on a trade if the fear of Leonard going elsewhere after just one season exists.

Another factor is the slow recovery that Leonard has made from his injury. However, his relative youth and overall ability will likely cause the Cavaliers and other suitors to look past that issue as they make their final decisions on whether or not to pursue this trade.