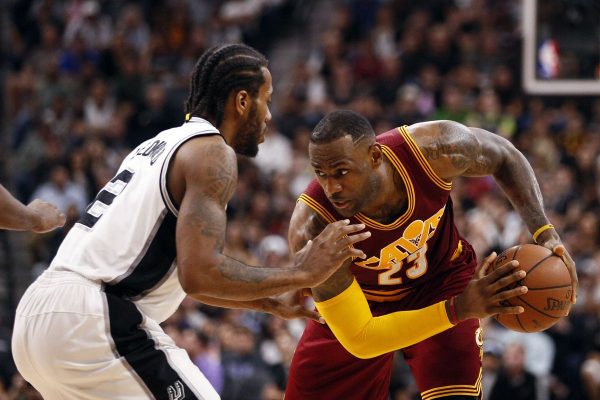 The NBA playoffs are now in full swing, but the rumors and reports regarding LeBron James‘ impending free agency show now signs of slowing down.

The latest report came during Monday’s episode of ESPN’s “SportsNation,” where Brian Windhorst explained that whatever happens, James’ future will be linked to Kawhi Leonard‘s.

“What happens to Kawhi Leonard is a link to what happens to LeBron,” Windhorst said on Monday. “Where Kawhi ends up this season, will have a direct impact on where LeBron ends up even if they don’t play together. They will be linked in where their futures will be.”

While a fairly recent report indicated that the Cleveland Cavaliers could be interested in bringing Leonard to Cleveland, Windhorst explained that the two All-Stars may be looking to play together regardless of whether it is for the Cavs or not.

“If the Cavs get knocked out before the Finals, and LeBron has six weeks to think about things, and six weeks to get in touch with Kawhi, things could get a little crazy,” said Windhorst. “Just think about Philadelphia for example. I could construct you a way that Philadelphia could trade for Kawhi Leonard and sign LeBron James.”

This is just the latest of countless reports regarding James’ future that have come out this season, and it is important to remember that no one knows for certain what his future holds. Still, it is clear that things are really starting to heat up as we continue to approach the offseason.

Until then, James and the rest of the Cavs are going to do all they can to advance to a fourth straight Finals appearance. Only time will tell if James is still around next season to make it a fifth.

cleveland cavaliersfeaturedKawhi Leonardlebron jamesnews ticker
← Previous Story Video: LeBron Scores on Lance Stephenson, Stares at Him All the Way Down Court
Next Story → LeBron James Fires Back at Reporter Trying to Bait Him After Game 3 Loss