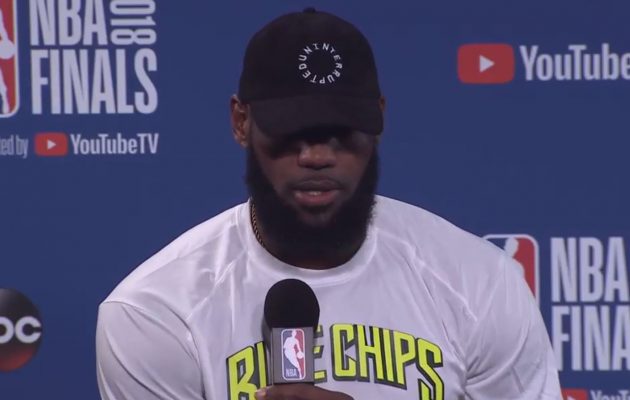 Despite a magnificent performance in Game 1 of the NBA Finals, Cleveland Cavaliers forward LeBron James walked off the court at Oracle Arena on Thursday night on the losing end of a 124-114 overtime decision. The frustration felt in the immediate aftermath of that contest has given way to a more positive outlook concerning his vision for Sunday night’s Game 2.

LeBron James called Game 1 of the NBA Finals one of the "toughest losses of his career" and a "tough 24 hours" after, but he "feels excited about the opportunity to be better, be great" now.

The 33-year-old James scored 51 points in the defeat, which offered little solace to the 15-year veteran. That frustration largely centered on the final minute of action, when two plays went against the Cavaliers. The first was a controversial blocking call against him that came after a charging call on Golden State Warriors forward Kevin Durant had been overturned. Then, in the closing seconds, teammate J.R. Smith inexplicably lost track of the score and failed to get off a potential game-winning shot.

The scoring barrage in Game 1 by James was simply the latest example of the incredible season he’s put together. Having won Finals MVP honors three times in his legendary career, James is certainly capable of following up one great performance with another.

Two years ago, the Cavaliers were facing elimination to these same Warriors, trailing 3-1 in a best-of-seven series. In Games 5 and 6, James scored 41 points in each game and then followed that up with a triple-double to give the Cavs their first-ever title. For good measure, he came through with an iconic block in the closing minutes.

James has been the main cog in the Cavaliers’ wheel throughout his career and perhaps never more so than this season. Delivering another great effort in a victory Sunday night would simply be another example of that importance.