Stephen Curry Speaks Highly of LeBron James Ahead of Game 1 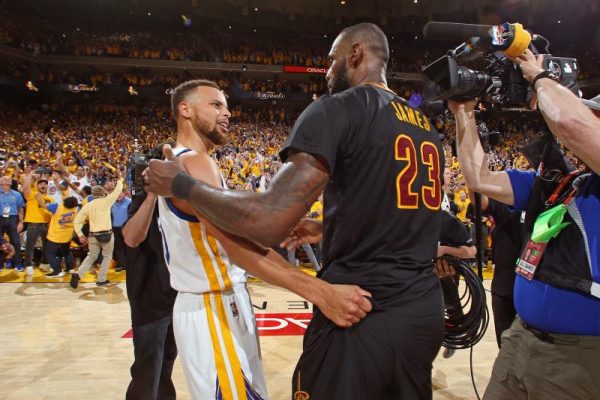 Golden State Warriors guard Stephen Curry will appear in his fourth straight NBA Finals on Thursday night. It is indeed a huge milestone for him and the club.

But sitting down with ESPN’s Rachel Nichols for an interview a day prior to Game 1, Curry acknowledged the leader of his only known Finals opponent to date: LeBron James.

Nichols asked the two-time NBA regular season MVP about how he felt going into the Finals facing James and the Cleveland Cavaliers yet again.

“I don’t know what the Finals is without seeing Cleveland, without seeing LeBron,” Curry said. “That sense of familiarity helps us, but he’s unbelievable.”

Curry continued to praise the King, as he recognized James’ own milestone of reaching the Finals for the eighth consecutive season. He said that James’ accomplishment of doubling what he and the Warriors had done was “pretty special.”

“We hope to get the best of him (James) in this series, and that’s what we’re going to try to do,” said Curry. “But there’s a true appreciation for what he has been able to accomplish and how he has dominated the Eastern Conference for eight straight years.

“[For James] walking into the Finals is kinda like, ‘Ah, this is where I’m supposed to be.’ So it’s pretty crazy.”