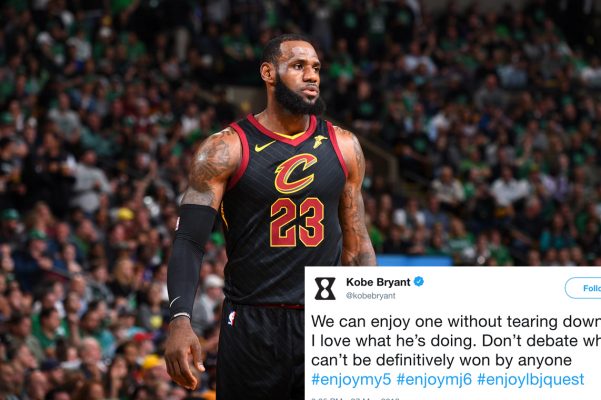 Cleveland Cavaliers forward LeBron James has managed to reach the NBA Finals for the eighth year in a row despite constant carping from his critics. Just after the Cavaliers’ 87-79 win over the Boston Celtics in Game 7 of the Eastern Conference finals, future Hall of Famer subtly acknowledged James’ incredible ability without actually mentioning his name.

We can enjoy one without tearing down one. I love what he’s doing. Don’t debate what can’t be definitively won by anyone #enjoymy5 #enjoymj6 #enjoylbjquest

Bryant was a part of five NBA title teams with the Los Angeles Lakers and played in two other finals. During his own career, he was also subjected to plenty of criticism about his ability to win. That was especially true after Shaquille O’Neal was no longer a Lakers teammate, yet Bryant managed to lead to more Lakers teams to NBA championships after O’Neal departed.

James will be going for his fourth title when the Cavaliers begin the NBA Finals on Thursday night against a still-unknown opponent.