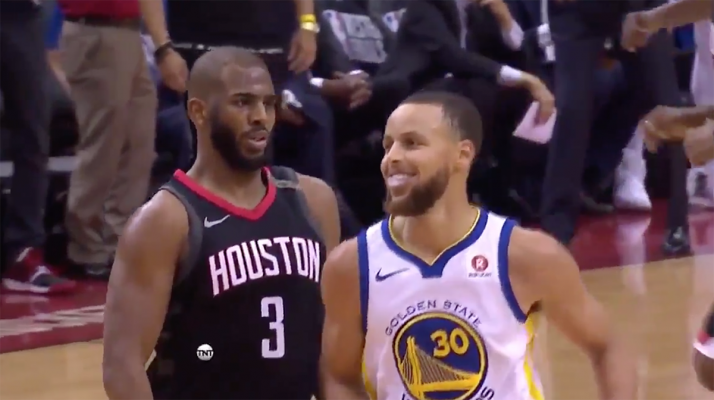 Cleveland Cavaliers forward LeBron James is focused on keeping his team’s season alive by defeating the Boston Celtics in Game 6 of the Eastern Conference finals on Friday night. However, that hasn’t stopped him from checking out the Western Conference finals, where he got some amusement from seeing close friend, Houston Rockets guard Chris Paul, deliver a shimmying move on Golden State Warriors guard Stephen Curry in Game 5.

LeBron enjoyed Chris Paul's Game 5 shimmy: "I was laughing, smiling like everybody else did."#Cavs

Paul had just hit a 3-pointer midway through the third quarter of Thursday night’s Game 5, when he made the move. That was Paul’s third basket from beyond the arc in the period, with his 20 points helping the Rockets take a 3-2 lead over the Warriors in their best-of-seven series. The reason for Paul’s action was in response to Curry doing the same thing in the midst of a Game 3 blowout win for the Warriors.

It’s possible that James had a flashback to the early portion of the regular season, when he offered up similar moves in the latter stages of a Dec. 1 win over the Memphis Grizzlies. In that instance, the moves weren’t meant to mock another opposing player, as in Paul’s case, but simply to celebrate a clutch basket.

Still, James isn’t averse to mocking Curry when the opportunity presents itself. In Game 6 of the 2016 NBA Finals, James blocked a Curry layup attempt and delivered a cold sneer directed at the point guard immediately afterward.

In order for James to consider repeating that move, the Cavaliers will have to defeat the Celtics twice in the span of three days. That would help send them to their fourth consecutive finals, while a defeat in either game will put a lid on the 2017-18 campaign.