Kevin Love Says He ‘Feels Great,’ on Track to Return for Start of Season 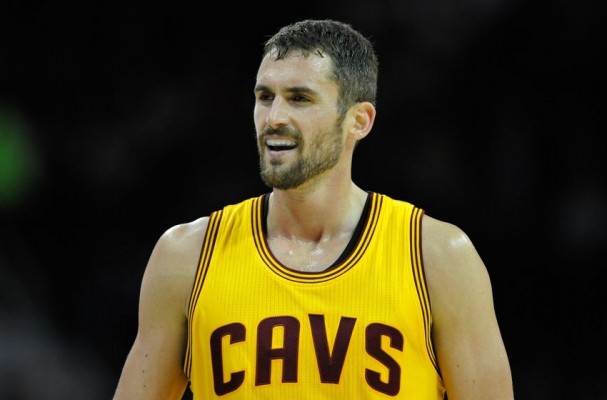 With Kyrie Irving expected to be out for the beginning of the season, Kevin Love is expected to take on an even bigger role for the Cleveland Cavaliers.

Despite dislocating his shoulder in last year’s playoffs, Love should be back for the start of next season. The veteran power forward confirmed this in a recent appearance on “Late Night with Seth Meyers”:

“I feel great. I actually spent three weeks in Park City, Utah at the Olympic training facility there, rehabbed my shoulder, got in great shape and now I feel great. I’m probably about a month, month and a half away, I don’t want to set an immediate deadline now but I really feel great.”

When Love suffered his shoulder injury in April, he was given a timetable of four to six months to recover. That seems in line with what he recently stated about his return.

Terry Pluto of Cleveland.com goes into more detail about Love’s training this summer:

“Love is doing extremely well. He has been at the Cavs practice facility. He also worked with a Cavs trainer in Utah, along with members of the Cavs medical team here.

“The Cavs believe Love is in exceptional physical condition. Last season, he lost about 10-to-15 pounds. That helped his quickness a bit, but the Cavs wanted Love to increase the strength in his legs and lower body.

“So he concentrated ‘on core training,’ which he believes will help him establish position and score more from the low post.”

The 6’10” forward struggled during his first season in Cleveland. Love was forced to adjust to being the third scoring option behind LeBron James and Irving, after spending the majority of his career with the Minnesota Timberwolves as the leading player.

Offensive plays weren’t designed to Love’s strengths, moreso revolving around James and Irving instead. Love averaged 16.4 points and 9.7 rebounds on just 43.4 percent shooting last season. His scoring average went down by 10 points in comparison to his prior season in Minnesota. The rebounds were down by about three boards a game, while his shooting percentage declined by more than two percentage points.

With Irving out for the start of the regular season, Love will finally have the chance to develop rapport with LeBron as one of the Cavaliers’ primary scoring options.