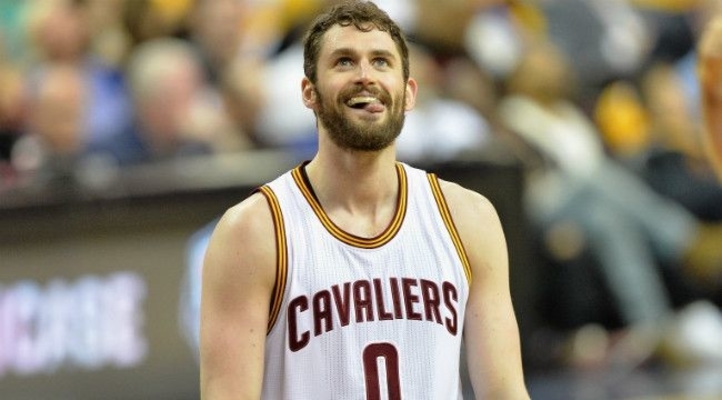 LeBron James and the Cleveland Cavaliers evened their series with the Boston Celtics at two games apiece with a 111-102 win on Monday night. As expected, the mood in the locker room was more than upbeat after the Cavs grabbed the momentum from the Celtics heading into Game 5.

According to Rachel Nichols of ESPN, James was talking to his daughter Zhuri via FaceTime, when she asked to talk to his teammate, Kevin Love.

“You walk into the Cavs locker room, Scott [Van Pelt], LeBron James is FaceTiming his young daughter Zhuri,” Nichols told her fellow sportscaster during a SportsCenter episode. “Zhuri is playfully asking for other players on the team to talk to her. ‘Kevin, Kevin! I want Kevin!’ So, you know, he brings the phone over to Kevin Love, they’re having a lovely moment. It’s all fun here in Cleveland. They’re tied 2-2 again.”

More details about their conversation were tweeted by Hayden Grove of Cleveland.com.

Great scene in Cavs locker room. LeBron was FaceTiming his daughter, Zhuri. She asked to see Kevin Love. Someone brought the phone over to Kevin and she said “good game!”

Kevin responded, “Not me, that was your Dad.” #Cavs

Love didn’t have quite the game you would expect from the All-Star forward as he shot a dreadful 3-for-12 from the field, finishing with just nine points. However, he was part of the highlight of the night when he made a spectacular full-court pass to James in the first quarter. James converted the pass into two points despite being surrounded by three Celtics players. Despite the poor shooting, Love grabbed 11 boards to give the Cavs a sizable 10-rebound advantage over the Celtics.

James was stellar as expected. The King scored 44 points to go along with five rebounds. Tonight was also a historic night for James as he passed NBA legend Kareem Abdul-Jabbar for the No. 1 spot in field goals made in the playoffs.

Congrats to @KingJames of the @cavs on becoming the #NBAPlayoffs FIELD GOALS leader! #ThisIsWhyWePlay #WhateverItTakes pic.twitter.com/8mEc3qD4Vp

Game 5 of the Eastern Conference Finals will be on Thursday night at TD Garden.

Hopefully, Love can confidently tell James’ daughter by then that he played a good game.