Report: LeBron James and Tyronn Lue Did Not Want to Trade Kyrie Irving 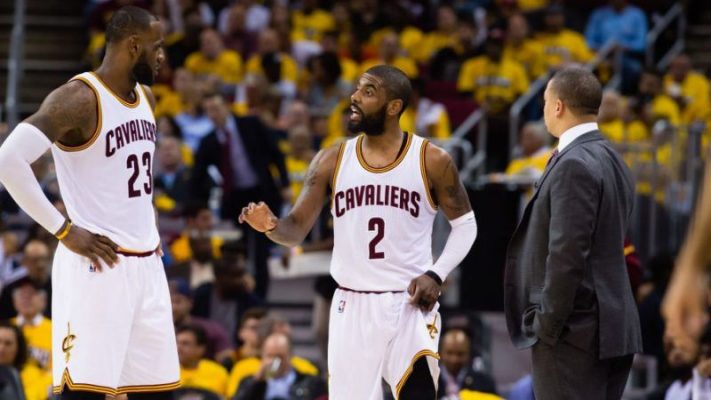 Tuesday night held not one, but two blows to the Cleveland Cavaliers‘ organization.

First, the promising Brooklyn Nets draft pick they had received from the Boston Celtics as part of the Kyrie Irving trade last summer ended up being good for the eighth overall pick in the upcoming draft, leaving them out of the running for much of the draft class’ premier talent. Hours later, the Cavs went down 2-0 to the Boston Celtics in the Eastern Conference Finals as Irving cheered on his Celtics teammates from the bench.

According to a recent report, if LeBron James and Cavs head coach Tyronn Lue had gotten their way last summer, Tuesday night may have gone quite differently.

On Tuesday, ESPN’s Dave McMenamin reported that both James and Lue were against trading the former Cavs point guard, despite the potential the Nets pick offered:

“The Nets finished with the eighth-worst record in the league this year, which is the most likely place where the Cavs’ pick will fall. However, by virtue of the lottery, Cleveland has a 2.8 percent chance of having its pick move up to No. 1 and a 9.9 percent chance of it falling in the top three. While the possibility of adding a top prospect has reinvigorated the Cavs’ front office and scouting department this season, both James and Lue were against the Irving trade at the time, sources told ESPN, even if it included an asset like the Nets pick.”

McMenamin went on to explain that Lue may have let fans in on his opinion of last summer’s blockbuster trade between the Cavs and the Celtics when he discussed Boston general manager Danny Ainge at shootaround before Tuesday night’s game:

“He’s great,” Lue said. “You want him on your side because he always gets the best deals. He always makes the right moves. He’s done great in the draft. And when he makes trades, he does a great job of that also. So, he is one of the best we have in his league.”

Ainge was instrumental in the deal that unloaded Isaiah Thomas, Jae Crowder, Ante Zizic, the Nets pick, and a future second-round pick in return for Irving. While Lue didn’t overtly say that he believed Cavs general manager Koby Altman made the wrong move in accepting the deal, it’s clear that he believes Ainge made the right one for the Celtics.

Through two games, the Celtics have bested the Cavs on both sides of the court despite being without arguably their two most talented players, Irving and forward Gordon Hayward. Considering that, there is no doubt that the Celtics’ future seems quite a bit brighter than the Cavs’ does at the moment.

With Cleveland serving as Boston’s victim both on the court and off of it, it’s hard not to imagine what might have been if James and Lue had gotten their way. Irving would likely still be in the Wine and Gold, and the Cavs’ path to a fourth straight NBA Finals appearance would likely seem a lot clearer.