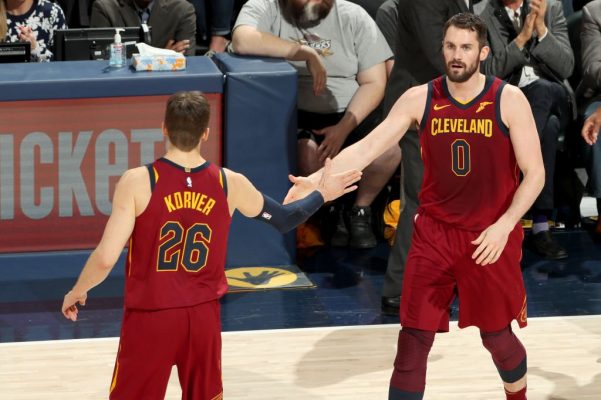 For much of the Cleveland Cavaliers‘ first-round series against the Indiana Pacers, Kevin Love struggled to make any sort of positive impact for the Cavaliers. He’s since been able to unlock the problem, thanks to a unique bond he’s established with teammate Kyle Korver, who’s also thrived under the plan of attack.

Zach Lowe of ESPN.com looked at the process involved that’s allowed the duo to supplement LeBron James‘ prodigious output. That combination eliminated the national image that James is simply a one-man team and led to the four-game sweep of the Toronto Raptors.

The clearest evidence of how important this new “Big 3” is to the Cavs’ fortunes can be seen in this item from Lowe:

“Love and Korver are second and third, respectively, on the team in postseason scoring,” Lowe wrote. “Cleveland piled up 125 points per 100 possessions against Toronto in 99 minutes with LeBron, Love and Korver on the floor, and outscored the Raptors by 41 points over that time, per NBA.com. Korver and Love are 50-of-117 combined from deep — 43 percent — in the playoffs.”

Lowe noted that what takes place tends to be more instinctive as opposed to any traditional strategic initiative:

“An improvisational off-ball dance of circles, zig-zags, and screens set in every direction until the defense falls in on itself,” Lowe described. “LeBron lords over the action from the top of the arc, waiting to fire the ball to whoever pops open.”

Going deeper into what’s involved, Lowe references a dizzying array of movements that caused major headaches for the Raptors:

“Aside from that set pindown play, they react in the moment to how the defense approaches them — and which two defenders are involved.” Lowe wrote. “It mostly starts with Korver positioning himself to run around a Love screen. That is dangerous enough. Staying attached to Korver at all costs is on the first page of any opponent scouting report.

“Some defenders plant themselves between Korver and Love, barricading Korver’s path to the pick — a technique coaches call ‘top-blocking.’ A variant: Korver’s defender might glue himself onto Korver’s outside hip, closer to the sideline, taking an angle that would make it easier to maneuver around Love’s screen.

“When Korver feels a defender doing that — almost climbing onto his back — he’ll slice backdoor. If the cut gets Korver open, Love’s defender will often sag back to snuff the direct pass from LeBron to Korver. That risks leaving Love open for a 3-pointer.”

That idea allowed the Cavaliers to flourish against the Raptors, with both Love and Korver’s long-range capability serving as deadly weapons. Despite the seemingly complicated nature of making sure this symphony of moves run smoothly, Korver boils it down to a simple component:

“We just do these things on the fly,” Korver says. “It’s just making reads. Everything works better if it’s just you making reads.”

Statistics over the course of the entire season clearly show how effective screens from either Love or Korver are for the other player, especially Love:

Defending against this for opponents requires flexibility with regard to player capabilities, which the Raptors obviously didn’t possess. However, the Cavaliers’ likely opponent in the Eastern Conference Finals, the Boston Celtics, offers a much stiffer challenge to Love and Korver when it comes to having such players.

Knowing this, Korver believes that the duo has only scratched the surface of what they can accomplish throughout the remainder of the playoffs. He also effectively likened the strategizing involved as something akin to chess:

The Cavaliers will start to find out if that success continues when the series gets underway on the road as early as Sunday, but no later than next Tuesday.